Platinum hitches a ride with sulfur in the Earth’s crust 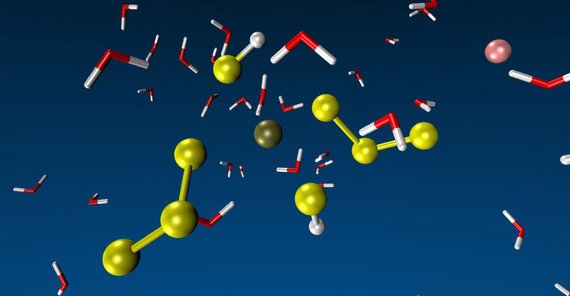 Photo : Clément Laskar
A 3D snapshot of the molecular structure of dissolved platinum in hydrothermal fluid obtained from molecular dynamics simulations. Coupled with in situ spectroscopy, such simulations provide information about the atomic structure and stability of dissolved chemical species in aqueous fluids that deliver critical metals to ore deposits in the Earth’s crust. Water molecules are depicted as red-and-white boomerangs; sulfur, platinum and sodium ions are shown, respectively, as yellow, brown and pink spheres.

Platinum group elements (PGE, also termed platinoids) have been believed to be extremely poorly soluble and little mobile in natural fluids and many technological solvents. A consortium of French scientists found a mean to render platinum far more soluble and therefore highly mobile in hydrothermal solutions, by using a particular chemical form of sulfur, the trisulfur radical ion [S3•]−. By forming very strong chemical bonds with platinum, this ion acts as a powerful vehicle to take up, transport and drop off the metal by sulfur-rich fluids circulating in the Earth’s crust. These findings require a revision of models of PGE deposit formation and may help to identify new PGE economic resources, as well as to offer novel opportunities for optimizing ore processing and nanomaterials synthesis.

Platinum-group elements (PGE: Pt, Pd, Rh, Ru, Ir, and Os) are among the most valued critical metals required by new technologies, in particular, for car industry, catalytic nanomaterials or medicine, with current prices for some of them up to 10 times higher than those of gold (e.g., rhodium, Rh >520 €/g). However, like gold, these metals are extremely rare in nature, with their average tenors in terrestrial rocks less than 1 mg per ton. How can they be concentrated in the Earth’s crust to attain minable (i.e., economically significant) levels that must be at least 1000 times greater?

“The mechanisms controlling the distribution and concentration of PGE in nature are yet insufficiently understood and, in particular, the role of aqueous fluids that circulate in the Earth’s crust and form ore deposits of other metals such as copper, zinc, silver or gold. In contrast to those metals, PGE are known to be poorly soluble in aqueous solutions containing salt (e.g., as Na+ and Cl–) and sulfur (as hydrogen sulfide, HS–, or sulfate, SO42–), despite multiple instances of enhanced PGE mobility in different hydrothermal settings within the Earth’s crust”, says Gleb Pokrovski who led the research.

A consortium of French teams attempted to solve this paradox by investigating the factors that may control the mobility of platinum, which is one of the most widely used elements of the group, in hydrothermal fluids. “We used the most direct in-situ method available so far, synchrotron X-ray absorption spectroscopy, that allowed us to measure both solubility and molecular state of platinum in model hydrothermal fluids under controlled laboratory conditions similar to those in the shallow crust (temperatures ~300°C, ~2 km depth)”, says Denis Testemale, a co-author of the paper. “We coupled these measurements with theoretical molecular dynamics simulations that enable to constrain the exact atomic-scale structure and composition of the species transporting platinum”, add Elsa Desmaele and Clement Laskar, co-authors. “Such fluids contain dominantly chloride, sulfate and sulfide, and, in much smaller quantities, another sulfur-bearing compound, so called trisulfur radical ion [S3•]−, discovered by our teams a few years ago, but so far ignored in models of Pt solubility in aqueous fluids”, says Maria Kokh, a co-author. “Unexpectedly, we found that this minor sulfur compound very strongly binds to Pt, thereby enabling its transport at tenors 10,000 times more than any other Cl- or S-bearing compound does allow”, concludes Gleb Pokrovski.

This discovery may offer new applications in geosciences, economic geology and nanotechnology. “Acting like powerful vehicles, the trisulfur radical ions are capable of carrying tens to hundreds of grams of Pt per cubic meter of fluid, thereby fulfilling one of the fundamental conditions of the metal ore deposit formation - the presence of a metal-enriched fluid phase”, says Gleb. The study therefore may offer ways for localizing new potential resources of this eagerly sought metal. Furthermore, the strong selectivity of [S3•]− for Pt and, by analogy, for electronically similar metals of the PGE family (e.g., Pd, Ir) could be used to improve selective extraction of those metals from ore as well as to explore new routes for PGE-based nanomaterials synthesis.