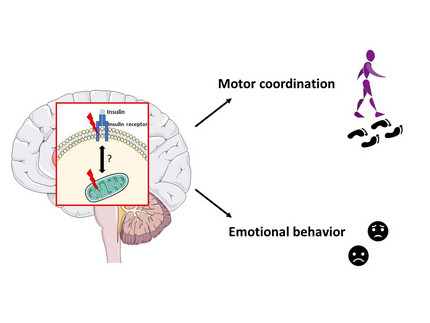 Photo: A. Kleinridders, University of Potsdam

Here, we investigate consequences of altered insulin action and emotional behavior. To assess this, we use the technique of intranasal insulin application to specifically affect brain function and behavior while avoiding peripheral consequences of excessive insulin signaling. Moreover, we analyze the effect of novel modulators of brain insulin signaling with respect to emotional behavior.

Furthermore, brain insulin resistance is associated with Parkinson disease (PD). In some studies, diabetic patients exhibit a 40 % higher risk of developing PD and insulin sensitizers are currently used in a clinical study to treat PD.  PD patients exhibit features of altered insulin signalling with reduced expression of insulin and IGF-1 receptors and further downstream signalling molecules. In addition, both diseases share common dysregulated pathways such as neuroinflammation, oxidative stress and mitochondrial dysfunction.  Loss of insulin sensitive, dopaminergic neurons in the substantia nigra is a hallmark of PD.

In this project , we aim to understand the contribution of a diminished insulin-regulated mitochondrial function for the development of PD, as a common mediator for the potential development of metabolic and neurodegenerative diseases.

Photo: A. Kleinridders, University of Potsdam