The Zanzibar Experience – Planting Trees in the “Partner Garden” 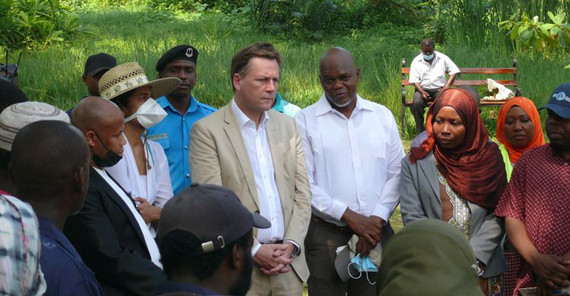 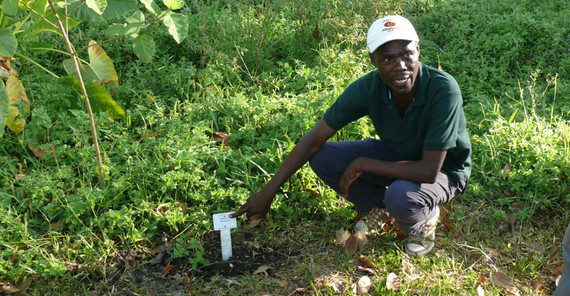 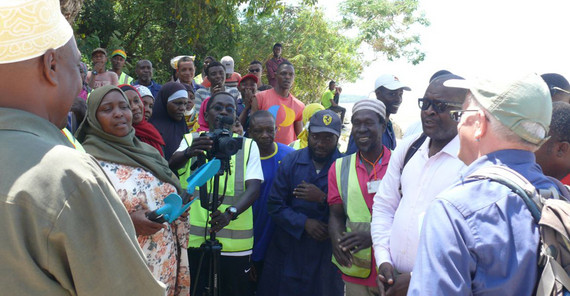 Zanzibar is one of Potsdam’s twin cities – both the Potsdam city administration and the university maintain lively contacts and frequently carry out joint projects. At the end of November, a Potsdam delegation with representatives of the university including the President, Prof. Oliver Günther, PhD, and Dr. Michael Burkart, the curator of the Potsdam Botanical Garden, arrived on site.

On Sunday, the delegation visited the Botanical Garden in Zanzibar, the partner garden of the Botanical Garden of the University of Potsdam. The garden is under municipal administration, but is largely run by volunteers organized in a “civil-based organization” (CBO), a kind of citizens’ initiative. It is probably the only botanical garden in the world that is completely run by volunteers, and for that reason alone it is something special. The members of the CBO are mostly ordinary people. Young trees had been prepared for planting in the garden. One after the other, Prof. Günther, his wife Mrs. Swaminathan, the Mayor of Zanzibar, Mr. Ali Haji Haji, as well as Dr. Michael Burkart, Christiane Benthin, and Ingo Kallmeyer from the Potsdam Botanical Garden planted a tree and watered it.

Afterwards, Prof. Günther and the Mayor of Zanzibar emphasized the importance of the Botanical Garden in times of threatened biodiversity and a changing climate in short speeches. Climate change is currently a direct concern in Zanzibar: Usually the rainy season would have begun here, but so far it has not rained a single drop. This situation contributes to uncertainty among the population in the region to a large degree and directly threatens their livelihoods. Due to the more or less precarious living and working conditions of the ordinary population, the unusual weather is a directly perceivable threat for many. The countries of Africa and around the Indian Ocean are hit particularly hard by the consequences of climate change that are already becoming apparent. Since these countries have only contributed to the causes of this development to a very small extent, this seems particularly unfair from a global point of view.

The Zanzibar garden has a collection of rare and endangered native plants, which curator John Ndege assembled, primarily from natural plant populations of the Zanzibar archipelago. These plants are already being used for propagation to bring seedlings to other gardens and back into the wild, but so far, this is still being done on a small scale. Mr. Ndege was financed for more than two years with funds from a cooperation project between the municipal administrations of Potsdam and Zanzibar, in which the University of Potsdam was also involved, in particular the Geoecology department with Dr. Torsten Lipp and the Botanical Garden. The main purpose of Oliver Günther’s trip is to further support the cooperation.

Due to the strong population growth and living conditions that are often uncertain, the pressure on the natural environment in Zanzibar is particularly high. This manifests itself specifically in the fact that forests on the Zanzibar archipelago now only exists in protected areas – at least forests worthy of the name. This also means that numerous species of plants, animals, and fungi are at risk of extinction or highly endangered. It is therefore of particular urgency in these regions to help such rare and endangered species. For this reason, the work of the local botanical garden addresses two of the most significant global crises at the same time, namely the climate crisis and the biodiversity crisis. Any skeptics who do not want to acknowledge the concrete, life-threatening consequences of these crises would therefore do well to travel to Zanzibar and not to lie on the beach during the day and party in the evening, but to embark on a journey to the countryside where they can see these connections if they travel with open eyes and some background information.

Garden curator Mr. Ndege’s botanical work in the field makes substantial contributions to the knowledge of the endangerment situation of the flora in Zanzibar. This knowledge must currently be described as fairly incomplete as of yet.

Many members of the CBO were present in the garden on Sunday, so the event had an almost festive feel to it. They accompanied the delegation on a tour to the sea – the garden also has a small beach. Finally, they received gardening tools as gifts from Michael Burkart. The CBO currently has over 70 registered members. The fact that it is organizing itself in such a formal way is a new development that is to be welcomed, because it shows that people are in the process of taking their destiny into their own hands. Due to the living conditions, this is anything but a matter of course, because if you do not know in the evening what you will eat the next day, it is particularly difficult to muster the energy for volunteer work. All the more impressive is the enthusiasm that is palpable on site at the botanical garden. The CBO has recently bought and put prints on yellow vests for its members, so that others can immediately tell who works in the garden. Another noteworthy fact is the roughly equal gender ratio among CBO members.

Unfortunately, the Zanzibar Municipality does not currently have the funds to continue employing Mr. Ndege since the project funding expired at the end of 2020. Even so, Mr. Ndege continues to come to the garden almost every week, guiding the CBO’s most dedicated members and bringing in propagation material of other plant species whenever he finds any. He currently works as a freelance botanist for various projects on the island and thus travels a lot, but has also had difficulty making a living since the project funding ended. He is an excellent authority on the local flora and one of the best botanists of the coastal areas of East Africa. There are few botanists in the region overall, so his dedication to his previous job is to be met with special appreciation. His expertise in the field is indispensable, but one of the obstacles to his permanent employment is Tanzania’s legislation on foreigners – Mr. Ndege is Kenyan.

Botanical gardens are very important places on a global scale for dealing with the twin crises of the changing climate and biodiversity. The connections between the causes and consequences of these crises and the individual behavior of each and every person are still not clear to many people, also in Germany. This is even more true in Zanzibar because of the low levels of education. Wild wood is still used to meet the daily needs for firewood or to build simple houses. The same applies to the collection of medicinal plants, for example, the bark of certain shrubs and trees.

Botanical gardens can help turn this around for the better in more ways than one. They can ensure the survival of the species that are most threatened in their existence by planting them in the garden, and also provide material through simple horticultural propagation that can be returned to the wild if there are areas where its continued survival seems assured. They can also teach sustainable resource management – with regard to the use of the natural environment, but also with regard to rural agriculture. While the project was still ongoing, such courses were conducted on several occasions. Above all, botanical gardens can also be involved in education in order to help the general public understand the above-mentioned interrelations. Collected native species are particularly suitable for this purpose, as they are directly affected by the consequences of the climate and biodiversity crises. Efforts are currently underway to establish such educational work in the garden. However, under the current conditions, it is difficult to find the necessary financial resources. The visit of the Potsdam delegation is an attempt to help in this respect and to increase local awareness of the Botanical Garden.