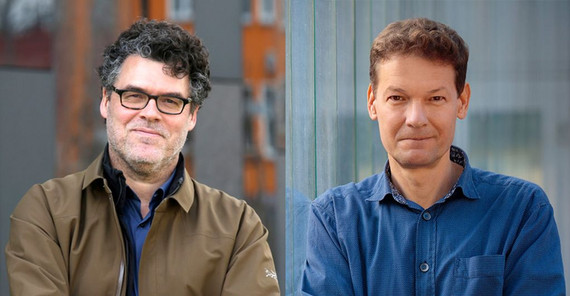 Prof. Wagener and Prof. Hovius joined 59 individuals in the 2021 Class of Fellows. They were selected by AGU because of their outstanding achievements and contributions by pushing forward the frontiers of science. They also embody AGU’s vision of a thriving, sustainable, and equitable future powered by discovery, innovation, and action. Equally important is that they have conducted themselves with integrity, respect, and collaboration.

Water expert Thorsten Wagener has taken up the professorship for the analysis of hydrological systems at the Faculty of Science, Institute of Environmental Science and Geography, University of Potsdam, on January 1, 2021. As Humboldt Professor, he occupies a central position in the Potsdam research network on climate and environmental topics. He will further develop hydrology as a key science that is critical to our understanding of how climate change and other human activities alter the risk of floods and droughts.

Niels Hovius is acting Scientific Director of the Helmholtz Centre Potsdam, German Research Centre for Geosciences, since November 2020. He joined the GFZ in 2012 from the British University of Cambridge and headed the Geomorphology Section. In a joint appointment he is Professor at the University of Potsdam, Institute of Geosciences. His work focuses on Earth surface dynamics, especially erosion processes and their impact on the Earth system.

Since 1962, the AGU Union Fellows Committee has selected less than one in a thousand of their members as new Fellows. AGU, a nonprofit organization that supports 130,000 enthusiasts to experts worldwide in Earth and space sciences, annually recognizes a select number of individuals as part of its Honors and Recognition program. AGU will formally recognize this year’s recipients during AGU21 Fall Meeting, 13-17 December 2021 in New Orleans, LA and online everywhere.