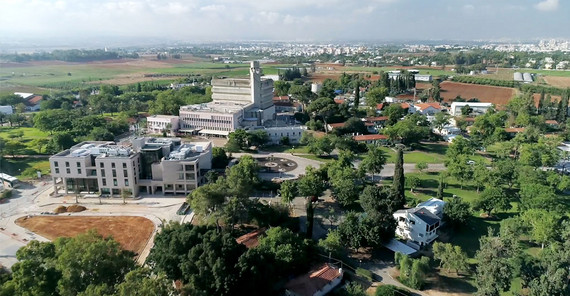 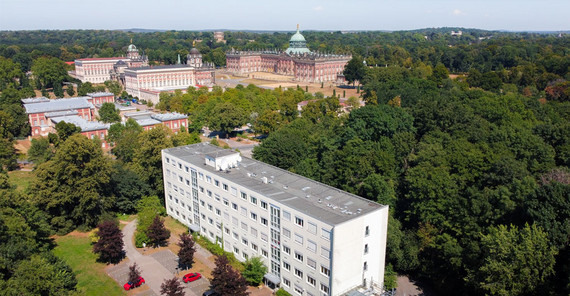 Photo : Beit Berl College
Beit Berl College near Kfar Saba
Photo : Tobias Hopfgarten
Aerial photo Am Neuen Palais, House 19
“Power is the ability not just to tell the story of another person, but to make it the definitive story of that person.” This is an insight that Nigerian writer Chimamanda Ngozi Adichie shared with the audience at a TED conference in 2017, pointing out the danger of reducing people, cultures and countries to a “single story.” This is how stereotypes, which limit or even manipulate the perception of reality, are created according to Adichie.

Her very personal talk, which was translated into numerous languages and widely shared on the internet, was the starting point for an intercultural teaching project initiated by Dr. David Prickett, Head of the Center of Languages and Key Comptences (Zessko) at the University of Potsdam and Karen Abel of Beit Berl College near Kfar Saba in Israel. Their plan was for students from both countries, who are studying to become English teachers, to engage in conversation with each other, thereby training their English speaking and hearing skills while, at the same time, overcoming stereotypical beliefs held about life in the other country. The Center for Quality Assurance and Development (Teaching and Media Division) supported the instructors. The pilot phase of the project took place during the memorable 2020 summer semester, but its digital nature did not really interfere with the project. On the contrary: the students were able to communicate with each other in mixed groups across cultural and organizational barriers by making use of the potential of Collaborative Online International Learning (COIL).

“It was my first time working with a university abroad and it was a very positive experience,” says Katrin Mertens, a student in Potsdam. She added that the Israeli students had always been well prepared and that it was fun to get to know and discuss topics from a different perspective. The digital format, however, was rather tricky: “I had to concentrate very hard to understand everything acoustically, to find my way around the various chat rooms and always be there at the right time.”

The student teams were able to complete their tasks using various tools and apps. Support videos were provided to help them use the technology correctly. During the different work phases, Karen Abel observed how students took responsibility, responded to minor problems in a flexible manner and supported each other when time was running out.

Ludwig Reinhold, a teaching degree student in his second semester, found it particularly trying when the teams wanted to upload their videos to Open.UP. But that was the only aspect that posed a problem for him. He took advantage of the COIL seminar to learn about digital teaching and learning formats and to train his linguistic and intercultural skills at the same time. Prior to his studies, he had already worked for a school project in India for several months and experienced first-hand what it means to teach children from different backgrounds, to respect traditions and to show consideration for religious differences. That is why he felt no hesitation when meeting the students of Beit Berl College online. And yet, he discovered that he had some preconceived notions about Israel. For example, he was surprised by reports about the high-tech industrial sector and bold planting projects in the desert. Did he have a false image of Israel? Perhaps. The seminar gave him a chance to adjust it.

In the meetings of her group, Katrin Mertens also learned that Israel is far more multifaceted and multicultural than she had thought. The Israeli students, on the other hand, seemed to be much more informed. “They had a positive opinion of us Germans across the board. And a thoroughly reflected one at that,” she says. What the project taught her above all else was to listen carefully, to react empathetically and to counter any rash thoughts – whether expressed by her or others. “In spite of all the diversity, we are not that different after all. And that is what connects us.”

Lecturer Karen Abel was fascinated by the cultural diversity and wealth of personal stories, which provided some interesting tie-ins during the recorded group discussions. The students discussed codes of conduct, developed a joint document on the topic and generally treated each other with great respect, she observed. From her point of view, the course provided a model form of authentic learning. In addition to pedagogical skills such as understanding and (not) judging the “other,” the students were also able to train their flexibility, social adaptation and responsibility. And last but not least, they were able to hone their oral language accuracy skills in these discussions, as more than 80 percent of them stated in a survey.

“Part of the success can be attributed to David Prickett’s experience,” says Karen Abel. She is certain that such a project could not have succeeded without the close cooperation with him, their similar way of thinking and shared pedagogical convictions. In the meantime, the two instructors have evaluated the course and optimized some aspects so that the next round is already set to begin in the coming winter semester. Their project will be presented at the DAAD conference “Moving Target Digitalisation: Re-Thinking Global Exchange in Higher Education” at the beginning of October.

This text was published in the university magazine Portal - Zwei 2020 „Digitalisierung“ (PDF).