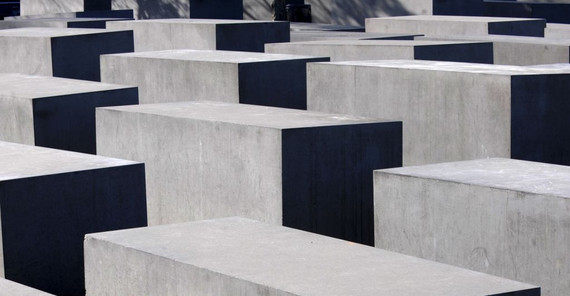 Memorial to the Murdered Jews of Europe in Berlin. Picture: Karla Fritze

Trauma and space – literary scholar and philosopher Judith Kasper brings these two terms together in a research project funded by the DFG about the Holocaust and its ‘aftermath’ in literature and at real places. Geographical space implies dispersed trauma and memory of the horrible event of the Holocaust.

At the beginning were “astonishment and horror”. In a Berlin exhibition about the war of extermination in the East, Judith Kasper saw a map that marked the known labor and concentration camps. And there were many. Underneath it said that determining the actual number would probably never be possible. This sight – “a huge territory patterned like a carpet with many black dots” – made Kasper reflect on the spatial understanding of the Holocaust: Institutionalized memorials at places of crimes and public monuments convey the impression that you could limit extermination to specific, nameable places. Even very thorough historical research has not yet managed to completely depict the system of camps because it constantly changed, had varied structures, and was often closely connected with its civil environment. Historiography sometimes even calls these “campified regions”.

There were two other observations. One was the literary descriptions of survivors: They found the camp of all places, with its total cutoff from which there was no escape, to be an abysmal place, a “place beyond geography” or a “void area”. Secondly, burning as a method of extermination also has a spatial dimension. Smoke and ashes spread far and wide. Thus remembrance and grief are not limited to specific places as memorials and cemeteries suggest.

Geographical space itself implies dispersed trauma and memory of the Holocaust’s terrible events – this outlines the idea of Kasper’s present research project “Traumatized Space. Topography, Dissemination, and Transference of the Holocaust”. The scholar, who holds two doctorates, wants to contribute to “a fundamentally new spatial understanding of the Holocaust” with this project, which is funded by the Deutsche Forschungsgemeinschaft (DFG) and grants her a temporary research project at the Institute for Romance Languages and Literature at the University of Potsdam.

Trauma and space – these two terms with their idiosyncratic reminiscence have a different meaning for insiders than in our everyday language. “You often come across the term ‘trauma’ in the field of cultural and literary studies,” Kasper explains. “It has become increasingly imprecise.” That is to say: Historians tend to label the singular event of the Holocaust a trauma but ignore the psychological and social wounds it has created, whereas psychoanalytically oriented literary studies are based on Freud’s understanding of psychological trauma. It may remain concealed for a long time but when it surfaces, like in case of the hysterical fits Freud studied, the causal event often remains suppressed.

“I did not merely want to introduce a new term,” the researcher says, “but rather wanted to make the existing more precise.” This is why she initially elaborated on the psychoanalytical meaning in the theoretical part of her project and only then connected it with space. This term has also changed in the academic discussion about the Holocaust. As a consequence of the Nazi ideology propagating an expansion of the “Lebensraum”, thinking about real space was frowned upon for a long time. Only at the end of the 1980s did the opinion that real space always relates to those who live or lived there and perceive it in their own way became increasingly prominent.

Kasper describes another crucial experience that led her to the idea about traumatized space. At the end of the 1990s, she was living and working in Paris. Just when France had finished the prestigious new four-tower national library – symbolizing its “cultural memory” – a German journalist pointed out that there had been a Nazi internment camp at exactly this location. The scholar observed something surprising. The new building and its aesthetics were heavily disputed, with critics often using words like “isolation” and “void” that would be fitting for a concentration camp, but the construction site’s past was never mentioned. The polemical headline “Return to the Scene of the Crime” apparently referred only to criminal technical deficiencies. “Two worlds collided in this discussion without coinciding – speaking about the Holocaust and about a concrete area and building,” Kasper says. “Exaggerating, one might say that the Auschwitz Memorial is not a traumatized space whereas the French National Library is.”

How does she proceed in practice to support the concept of the “traumatized space”? Using the literary scientific method of systematic text analysis, the researcher took three key texts about the Holocaust. Two were written by survivor witnesses: Primo Levi’s report If This Is a Man about the Buna labor camp near Auschwitz and Fatelessness by Buchenwald concentration camp survivor Imre Kertész. The third example is the novel Austerlitz by W.G. Sebald, in which a young art historian, hidden as a boy with foster parents, gradually comes to understand the fate of his family and is haunted by visions about the camp although he had never been there himself. Based on these three works, Kasper analyzes the linguistic forms and images used to describe the traumatic experience in the camp – that often go beyond the concrete place.

Hell was a very common comparison. “Nowadays, in our own time, hell must be like this,” Levi writes about the moment he arrived at the camp, where the prisoners almost dying of thirst have to wait after four days in a crowded goods wagon, in a great bare room, a tap keeps dripping but above is a card which says that it is forbidden to drink as the water is dirty. A bit later the prisoner, still tortured by thirst, breaks off an icicle outside the window. At once a guard snatches it away from him and when he asks “Warum?” the guard just snaps “Hier ist kein warum” (there is no why here). Levi recalls a verse from Dante Alighieri’s Divine Comedy when the narrator, on his journey to limbo, understands that he cannot expect any help. We find not only this image of Dante’s hell in Levi’s work but also in many other texts about concentration camps. Kasper wanted to find out why this image persists although the analogy between the Nazi camps and the salvation idea of the medieval poet that the path to paradise leads through hell is problematic. As the scholar began studying Dante’s epic more deeply, her perspective became inverted. Her work with the texts on the concentration camps trained her eye for linguistic expressions of the traumatic and enabled her to show to what extent something completely unresolved lies in the Divine Comedy. At the same time, Dante’s text appears as a large archive of poetic manners of handling traumatic experience. The  authors of the three analyzed works also drew on this source. “I really found a blank spot in the research,” Kasper says, “because Holocaust researchers rarely have an idea about Dante’s philosophy and vice versa.”

One scene in Levi’s book is particularly impressive. He wants to acquaint a French fellow-prisoner with the Italian language. Dante verses he had learnt at school come to his mind but only in fragments. While reciting them, he is deeply moved by the beauty of the language and precision of form. So the prisoner can create some kind of respite for himself and his neighbor in the middle of the camp’s terror on their way to getting their ever-same watery soup. Judith Kasper speaks about this with audible joy. “Literature as a means of life – with this I can oppose horror.”

Dr. Dr. Judith Kasper received a PhD in French literary studies from the University of Freiburg and in philosophy from the University of Verona. Her manifold research interests include French and Italian literature as well as Holocaust studies, space and memory theories, psychoanalysis, and poststructuralist theory formation. Since April 2011, she has had a temporary research project at the Institute for Romance Languages and Literature at the University of Potsdam funded by the Deutsche Forschungsgemeinschaft (DFG).