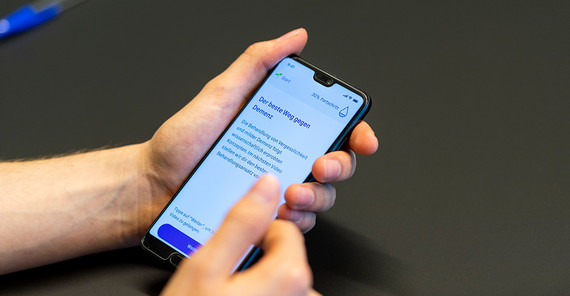 Anyone over 50 who forgets names, appointments, or words increasingly often should be concerned about their health. Memory disorders can be a sign of early dementia. Between 4 and 6 million people in Germany are currently affected. The disease is chronic and develops gradually into pronounced dementia. However, with diet, exercise, regular social contact, and exercises for the brain, there is a lot that can be done to slow down this process. The start-up company memodio is developing an app for affected persons to counter forgetting.

“No one develops dementia overnight,” explains Dr. Doron Stein. Instead, forgetting comes gradually. At first, people over 50 notice slight cognitive disturbances. They forget things more often, have difficulty finding the right words, orienting themselves, or concentrating on something. In Germany, 4-6 million people are in this preliminary stage of dementia. This progresses slowly and eventually, after years, leads to full-blown dementia that hardly allows independent living. “The biggest problem is that these people are not being cared for because no therapy so far exists for pre-dementia,” Stein says. “Pharmaceutical companies have been researching this for over 20 years, but so far largely unsuccessfully.”

When it comes to dementia research, the physician is up to date. In 2021, he published a white paper with current research findings on the care of early stages of Alzheimer’s disease, which is the most important trigger for dementia. Scientific and medical literature shows: While there is no cure for gradual forgetfulness, there are certainly some measures that can slow the progressive decline in memory skills. Exercise, nutrition, memory training, social participation, and the management of risk factors are all weapons against dementia. In particular, the combination of all these measures showed its effectiveness in studies, while each one on its own hardly helped against early dementia.

So something can be done about mental decline in old age, but many people have no idea that their problems are an early form of dementia. Only a very small number of those affected are currently diagnosed correctly. “Many patients and even doctors blame it on increasing age, in which one simply deteriorates,” Stein explains. The physician wants to change this state of affairs – with the help of an app.

Together with physician Felix Bicu, who is also a specialist for dementia, and software engineer Paul Zimmermann, he founded memodio, a company that develops a digital application for people with early dementia. “This could become such a big thing, we’re doing this full-time now,” the team of three, who already knew each other from a previous project, decided. “Full time” – for the founders that means that their working week usually has more than 60 hours. “Especially during the start-up phase, you sometimes have to get through two weeks of work in seven days,” Zimmermann, who is feeding the medical knowledge of his founding partners into a software application, explains.

For the programmer, this task involves some challenges: The target group has mild cognitive limitations, which he must take into account when designing the app. Seniors also generally have a very different perception and different needs than younger people. The founders are establishing these specific aspects with user-centered research, many surveys, and tests. The profiles are designed in such a way that they address individual health status and progress. The therapy plan evolves along with it. “You have to put yourself in the user’s shoes in a completely different way and proceed differently than with an ordinary app,” Zimmermann explains.

The result of the work so far is already impressive: In 2021, the team received an EXIST start-up grant for its business idea, with which the German Federal Ministry of Economics and Climate Protection supports technology-oriented and knowledge-based start-ups from the university and research landscape. It also won the Berlin-Brandenburg business plan competition. At the end of 2021, this was followed by the company’s incorporation as a limited liability corporation (GmbH). A few months later, the team already has six employees in addition to the three founders, and a first prototype of the app is ready, which goes far beyond previously known applications for memory training.

“We’re not just assembling any app but a medical product,” Zimmermann emphasizes. Medical knowledge about pre-dementia is reflected in a comprehensive treatment plan tailored to patients. The health app educates users about the disease, helps manage risk factors such as poor hearing and vision, diabetes, obesity, and cardiovascular disease. Memory is trained with exercises for recollection abilities, reaction speed, and concentration. It also offers suggestions on how to change one’s diet to one that promotes cognition, with low carbohydrates, lots of vegetables, fish, and white meat instead of red.

“There are some people in this target group who are socially quite isolated,” Stein describes another important aspect of dementia care. Contacts with relatives or friends, taking a walk together, and conversations are a component of therapy that should not be underestimated. The app is intended to support the affected people in promoting these contacts and reducing inhibitions. For example, it contains instructions on how to find analog offers for meeting people on the internet. And finally, it also includes physical training that is adapted to the respective fitness level previously indicated by the user. The exercises help the brain stay fit and are intended to improve quality of life.

If you want to stop your dementia, you have to keep at it regularly – “several times a week, preferably every day,” Stein explains. The personalized therapy plan should be followed over several months and bring about lasting changes in one’s own behavior. To make this work, the app contains lots of elements for motivation and a reward system, which, however, is still a “trade secret.” With the help of detailed statistics, users can also keep track of their own progress.

The coming months are most probably another busy time for the team. Videos will be shot, the app’s functions optimized and checked out by test subjects. The founders also plan to have their app certified as a medical product. The app should be available for download in early 2023. After that, a large study is planned to prove the medical benefits of the product with data. If that succeeds, the three will be at the threshold of the next big step: getting the app approved as a digital health app, which will allow it to be marketed on prescription. “Of course, this is an attractive goal for us, but it also involves high requirements and a lot of documentation,” Stein explains. “But the effort will certainly be worth it.”

About 1.6 million people in Germany suffer from dementia and gradually lose their mental abilities. At the beginning of the disease, short-term memory and retentiveness are particularly impaired. Up to six million people in Germany suffer from these early signs of the disease. Later, long-term memory, language, and orientation are affected, too. There are various causes for the disease. Alzheimer’s disease, in which nerve cells in the brain are destroyed by incorrectly folded protein particles, is responsible for about 60% of all dementia cases. But vascular damage, high alcohol consumption, or brain injuries can also lead to the typical symptoms of dementia. Manifested dementia can be treated with physiotherapy, ergotherapy, or medication with anti-dementia drugs. For the preliminary stage of dementia – so-called pre-dementia – there are no approved drugs in Europe yet. However, a combination therapy of exercise, memory training, social participation, and a balanced diet can positively influence the course of the disease.

For the development of the health app, the founders are looking for test persons. If you are older than 50, suffer from mild forgetfulness, and want to test the app, you can get on the waiting list at https://memodio-app.com or send an email to infoumemodio-apppcom.

The project memodio has been sponsored by the Federal Ministry for Economic Affairs and Climate Action’s EXIST program since 2021, as well as the start-up service of Potsdam Transfer, the central institution for start-ups, innovation, and the transfer of knowledge and technology.

Dr. med. Doron B. Stein studied medicine and health economics at Heidelberg University. He worked as an assistant physician at the Charité Berlin and as a management consultant in the digital health sector.

Felix Bicu studied medicine and health economics at the University of Heidelberg and worked as a medical doctor in the field of nuclear medicine and dementia imaging. He also advises other start-ups on medical and financial issues.