Networking for food: Bats communicate and work together for more efficient foraging 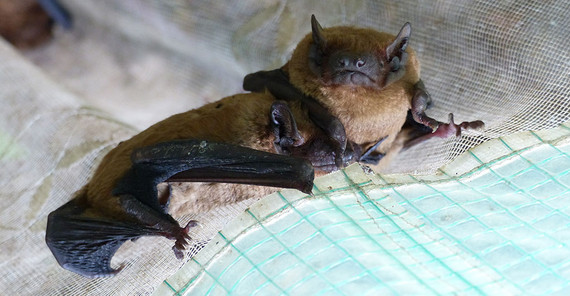 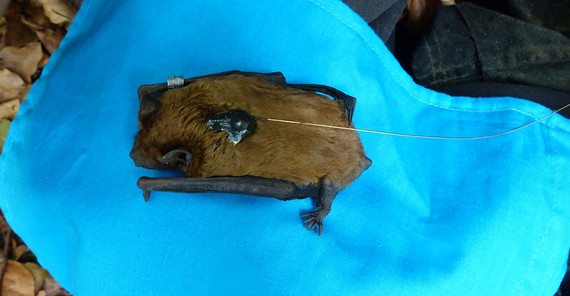 Social hunting strategies are already well documented in many animal species when prey is distributed in an unpredictable way across the landscape. In a new research paper, Manuel Roeleke and his team from the University of Potsdam and the Leibniz Institute for Zoo and Wildlife Research (Leibniz-IZW) have now demonstrated for the first time that animals – in this case the common noctule bat – join together and form a mobile sensory network in order to increase their chances of finding their prey. The analyses published today in the scientific journal “Proceedings of the National Academy of Sciences” show that predators can adjust to variable environmental conditions through flexible foraging strategies by networking with conspecifics.

Many predators need to find food on a daily basis. If the prey is irregularly distributed across the landscape and only available for a short time, this task seems like searching for the needle in a haystack. Animals that depend on such unpredictable prey have therefore often developed social strategies for foraging: During the search for prey, individuals are in contact with each other and exchange information about their environment. An international research team led by the University of Potsdam and Leibniz-IZW has now observed for the first time that common noctule bats (Nyctalus noctula) temporarily join together to form mobile, sensory networks while foraging. “The common noctule is particularly well suited for such investigations because its prey – swarms of insects – disperse completely unpredictably in open airspace,” explains the paper's lead author, Manuel Roeleke. “Moreover, the distance over which the bats can locate the insects via ultrasound is relatively small, about 10 to 15 metres. This makes it difficult for them to track their prey. On the other hand, the bats can perceive their own conspecifics over much greater distances, under ideal conditions up to 160 metres. Searching in a group should therefore be more successful.”

In total, the scientists analysed the flight patterns of 81 common noctule bats. This was made possible by small radio transmitters that send signals to an array of antennas. Florian Jeltsch from the University of Potsdam explains: “With the state-of-the-art ‘ATLAS’ system, we can simultaneously record the movement of dozens of individual animals. Thanks to the great support of local farmers and private landowners, we have been able to operate the tracking technology in the Uckermark district in Eastern Germany since 2018 – a unique opportunity to study animal movements and biodiversity in the European agricultural landscape.” His colleague Christian Voigt from Leibniz-IZW adds: “With the ‘ATLAS’ system, it is now possible to record the interactions of bats in flight. Our data confirm the theory of mobile sensory networks: During the search for insects, the bats fan out but remain in acoustic contact and, if necessary, adjust their flight paths to one another in order to search as large an area as possible.” If an individual bat in the network finds a swarm of prey insects, its neighbours are informed of this via changes in flight movements and via ultrasonic calls specifically used for insect hunting. This gradually makes all animals in the sensory network aware of the rewarding hunting area.

The scientific team compared the foraging efficiency of “networked” bats and of individual hunters as a function of group size and food distribution. In order to achieve this, they used a computer model developed by co-author Cara Gallagher using the empirically determined movement patterns. “Networking and exchanging information proved particularly useful for the bats when food sources were widely distributed in space,” Roeleke explains. “Thus, our model showed that ‘networked’ animals needed 40 percent less time to track down prey than bats that ignored their conspecifics while foraging.” By foraging in groups, bats can find prey even in large-scale cultivated landscapes and thereby also effectively contribute to the control of agricultural insect “pests”. If this is to continue in the future, the bats require consistent protection, particularly their system of roosts. When local populations become too small in numbers, the bats can no longer form efficient networks. As solitary animals, it is then difficult for them to find food quickly and reliably.