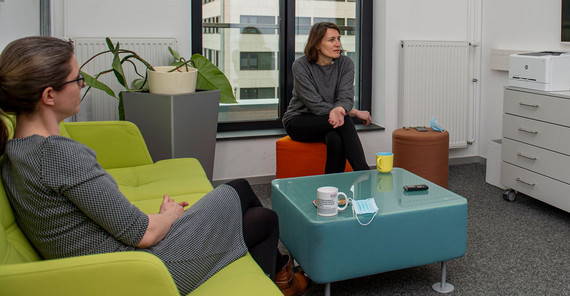 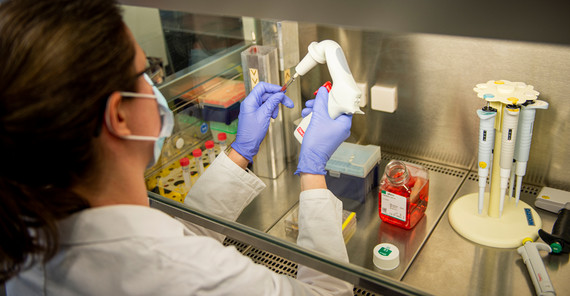 COVID-19 tests are an important tool in pandemic response. Antigen rapid tests provide a result in just a few minutes but are relatively inaccurate. PCR tests guarantee a reliable result but take much longer. Endowed Professor Dr. Katja Hanack and her research team are working on a detection system using human immune cells and an artificially constructed viral envelope that will combine the strengths of both methods – speed and accuracy.

“This is my personal treasure,” says Anja Hönow. The researcher carefully carries the laboratory dishes from the culture cabinet to the safety workbench, where she can work under sterile conditions. The cells growing in these dishes with a yellowish liquid must get fresh nutrient medium. These cells come from blood donations. The special thing about them is that their donors have overcome a Corona infection. The donors’ immune systems are familiar with the virus and have developed cells that, when they come into contact with the virus again, produce large quantities of antibodies that rapidly eliminate the pathogens. In a highly complex biotechnological process, Hönow has created a so-called hybridoma cell line from precisely such cells – so-called B lymphocytes. The cells can survive outside the body, continue to divide indefinitely, and produce lots of antibodies. Twice a week, the culture needs fresh nutrients to be able to grow.

The precious cells are part of an ongoing research project on the novel SARS-CoV-2 virus. “We want to develop a certified test system, which can detect the virus directly,” Hanack, who is the head of the project and Endowed Professor of Immunotechnology, describes the goal of her research. Thus, the intended detection system differs from existing well-established tests: The usual rapid antigen tests detect specific proteins on the surface of the virus. “Our system is not only designed to detect a fragment but really the whole virus,” Hanack explains. This test is intended to be “extremely accurate, safe, and nevertheless fast.”

To develop such a test, the researchers need human antibodies that can bind the virus particle. Millions of different B lymphocytes exist in human blood, each producing specific antibodies for different pathogens. Hanack and her team have developed their own patented technology to rapidly isolate and activate exactly those B lymphocytes that produce antibodies against SARS-CoV-2. This procedure, which has become very well established by now, takes two to three weeks.

The real challenge, however, is to design a stable system in which the cell cultures that develop from a single cell are comfortable over a long period of time. The goal is to create cell lines that can be cultivated under laboratory conditions and, as small antibody factories, permanently produce antibodies. Unlimited quantities of a reference antibody with consistent quality can be produced with such cell cultures. “Ultimately, we don’t only want to publish the results once but have a reliable, marketable technology,” Hanack emphasizes.

The human immune cells do not make this task easy for her research team. “Sometimes I have sleepless nights because of this,” Hönow admits. “You have to learn to understand the cells.” While the technology is already well established for cells from mice, human hybridoma cell lines are relatively new in the lab – and not as easy to satisfy. “Human cells are more demanding than mice cells,” Hönow says. To grow well, they need structures or an environment that is similar to what the cells find in the body - a “home,” as Hanack calls it. “They also like to live in groups,” adds Hönow “You might also say they need some cuddling.” Through trial and error and observation, she is slowly getting to know the specific needs of her cell cultures.

The donors’ blood samples pose further challenges in the laboratory because the cells differ considerably in quality, number, composition, and genetics. Lifestyle, genetic background, medications, and age – all these factors influence the cells of the immune system. “We can also see when someone who was sick donated blood,” explains Hanack. These cells are less vital than in people who are in good health.

To eventually work out an improved detection system for SARS-CoV-2, Hanack’s team is cooperating closely with the Charité in Berlin and the three biotech companies Wimedko, sifin and CellTrend. Coronaviruses are replicated in the laboratory there, but they do not contain any genetic information. “It’s just the outer viral envelope,” Hanack explains. Experts refer to these building blocks as virus-like particles. Such a particle cannot infect a human but has all the necessary information to be recognized by detection systems. The Potsdam researchers need these particles to build and validate their test system. “Everything has to be compatible – the pairs of antibodies and the virus particles,” Hanack explains.

The researchers already know that the antibodies they have produced in the laboratory can attach themselves to the surface structures of the viruses. Now they are testing whether they can also neutralize the viruses. If this is the case, these biomolecules would not only be candidates for an effective test system but also for an active ingredient that could be used to approach pharmaceutical companies to develop drugs. Since the antibodies produced in Hanack’s lab are of human origin, they would also be particularly well suited for therapeutic use in humans.

But first they focus on the detection system. “This should be launched as soon as possible,” Hanack says. A first prototype was already completed in May 2021. By the end of the project period in October, the certification process is to be completed so that the new test can already be used this year. “That was also the condition of the Federal Ministry of Education and Research for their funding,” Hanack explains. “After all, the system should be ready and running during the pandemic.” She also sees numerous other uses for the cell cultures developed in her lab that produce human antibodies. “It’s a large market in which we want to establish and develop ourselves.”

Prof. Dr. Katja Hanack studied biology in Rostock and Berlin. Since 2015, she has been an Endowed Professor of Immunotechnology at the University of Potsdam. The endowed chair is financed by the InnoProfile Program of the Federal Ministry of Education and Research.
E-Mail: katja.hanackuuni-potsdampde

M.Sc. Anja Hönow studied biotechnology at Beuth University of Applied Sciences Berlin. Since 2015, she has been researching in the working group Immunotechnology.
E-Mail: anja.hoenowuuni-potsdampde

This text was published in the university magazine Portal Wissen - Two 2021: „Departure“ (PDF).