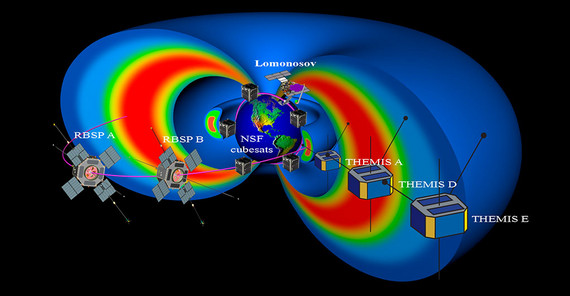 Photo : Yuri Shprits; Hintergrund: NASA
Scientific satellites traverse the challenging region of near-earth space known as the Van Allen radiation belt.
The Earth’s magnetic field is trapping high energy particles. When the first satellites were launched into space, scientists led by James Van Allen unexpectedly discovered the high energy particle radiation regions, which were later named after its discoverer Van Allen Radiation Belts. Visualized, these look like two donut-shaped regions encompassing our planet. Now, a new study led by researchers from GFZ German Research Centre for Geosciences shows that electrons in the radiation belts can be accelerated to very high speeds locally. The study shows that magnetosphere works as a very efficient particle accelerator speeding up electrons to so-called ultra-relativistic energies. The study conducted by Hayley Allison, a postdoctoral scholar at GFZ Potsdam, and Yuri Shprits from GFZ and Professor at the University of Potsdam, is published in Nature Communications and was partially supported by the University of Potsdam led SFB “Data Assimilation” (SFB 1294).

To better understand the origin of the Van Allen Belts, in 2012 NASA launched the Van Allen Probes twin spacecraft to traverse this most harsh environment and conduct detailed measurements in this hazardous region. The measurements included a full range of particles moving at different speeds and in different directions and plasma waves. Plasma waves are similar to the waves that we see on the water surface, but are in fact invisible to the naked eye. They can be compared to ripples in the electric and magnetic field. Recent observations revealed that the energy of electrons in the belts can go up to so called ultra-relativistic energies. These electrons with temperatures above 100 Billion degrees Fahrenheit, move so fast that their energy of motion is much higher than their energy of rest given by Einstein’s famous E=mc2 formula. They are so fast that the time flow significantly slows down for these particles.

Scientists were surprised to find these ultra-relativistic electrons and assumed that such high energies can be only reached by a combination of two processes:  the inward transport of particles from the outer regions of the magnetosphere, which accelerates them; and a local acceleration of particles by plasma waves.

However, the new study shows that electrons reach such incredible energies locally, in the heart of the belts, by taking all this energy from plasma waves. This process turns out to be extremely efficient. The unexpected discovery of how acceleration of particles to ultra-relativistic energies operates in the near-Earth space, may help scientists understand the fundamental processes of acceleration on the Sun, near outer planets, and even in the distant corners of the universe where space probes cannot reach.