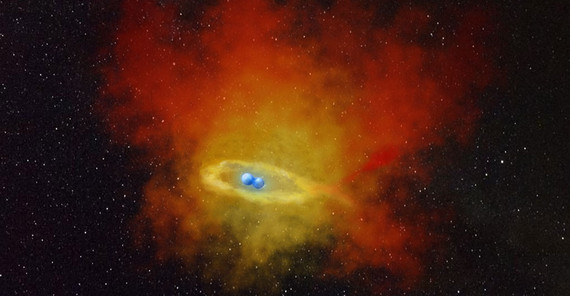 Photo : Nicole Reindl
An artist’s impression of the two merging central stars inside the planetary nebula Henize 2-428
Contrary to results published previously, a careful re-analysis of the merging stars inside the planetary nebula Henize 2-428 shows that no supernova explosion is to fear. The merger of the two stars could instead give rise to a new star with an exotic atmospheric composition. The results of the study were published in the journal Astronomy & Astrophysics by an international team of astronomers led by Dr. Nicole Reindl, open-topic research fellow at the Institute of Physics and Astronomy of the University of Potsdam.

Supernova explosions are catastrophic explosions of stars in space, were different types are distinguished. A supernova type Ia or thermonuclear supernova occurs when a white dwarf star acquires extra mass — either by accretion from a stellar companion or by merging with another white dwarf. Because the explosion always releases the same amount of energy, type Ia supernovae are often used to measure astronomical distances. However, the nature of the progenitor systems that leads to this kind of explosion is still elusive. Consequently, large observational and theoretical effort is put into finding such systems.

The only definite candidate for a progenitor system of a supernova type Ia scenario was the nucleus of the planetary nebula Henize 2-428 in the constellation Aquila, consisting of a close pair of white dwarf stars that orbit each other in close distance every four hours. The two stars are actually so close that they even share a common envelope. Back in 2015, an article published in the renowned journal Nature claimed a total mass of the two stars of about 1.8 times that of the Sun, which is high enough for triggering a supernova type Ia explosion.

A careful re-analysis of this system performed by an international team of astronomers led by Dr. Nicole Reindl now comes to a completely different conclusion. In their article, which appears as Highlight in the journal Astronomy & Astrophysics, they show that the total mass of the system has been significantly overestimated and that the merger of the two stars will not produce a supernova explosion. “One has to be very careful when analyzing the observations of central stars of planetary nebula” stresses Reindl, “not only the material from the surrounding nebula can lead to a contamination of the measurements, but also the gas that is between us and the stars”. Planetary nebulae are the expanding, glowing shells of ionized gas ejected from stars late in their lives. By modeling these nebula contributions and interstellar gases, the team could show that the total mass of the system only slightly exceeds one solar mass. This is far too low to produce a supernova Ia explosion and, therefore, the race to find a definite supernova type Ia progenitor system is re-opened.

The authors suggest that the merger of the two stars will instead give rise to a new star with an exotic atmospheric composition. “Every so often such exotic stars are found amongst white dwarf stars, and they are not very well understood”, explains Reindl. The team hopes now that their work will push forward investigation on these stars as well.