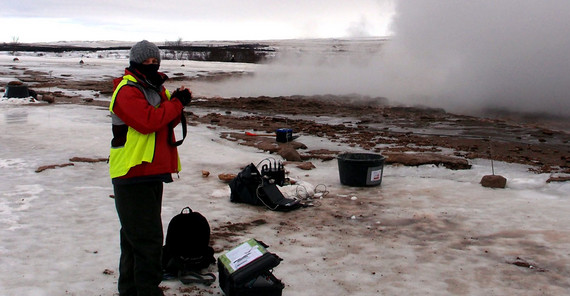 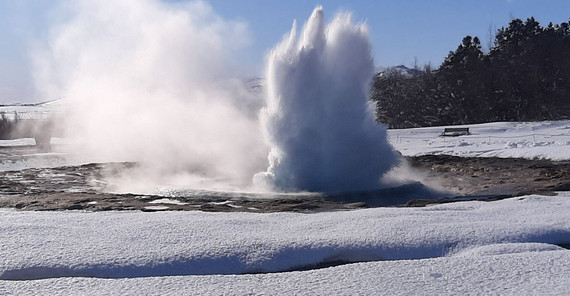 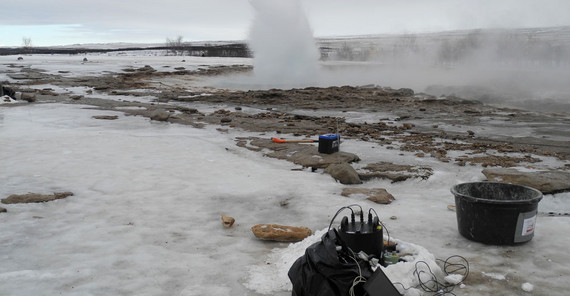 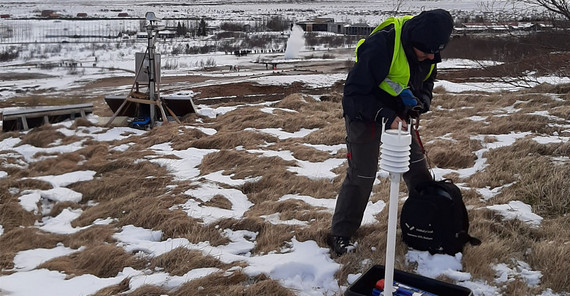 Photo : Daniel Vollmer
Eva Eibl documents the status of a station after recording overnight and before it is moved to a new location. The steam of the hot water in the pool is visible in the background.
Photo : Eva Eibl
Medium size eruption of Strokkur geyser on 14 March 2020. The bursting water bulge creates a wave in the water filled pool of the geyser.
Photo : Eva Eibl
Eruption of Strokkur as seen from the west on 12 March 2020. It was recorded by the blueSeis-3A rotational sensor (black) and Trillium Compact seismometer (green) in the foreground. The pathway is open for tourist in summer but was icy and closed in winter.
Photo : Eva Eibl
Daniel Vollmer installs a weather station (Thomas Walter, GFZ) on top of a hill northwest of Strokkur. Eruption of Strokkur visible in the background.
Iceland is worth a trip or two. Well known for its awesome landscape, its famous horses and its un-pronounceable volcanoes Iceland is flooded by tourists especially during the months of summer. People from all over the world travel through Iceland using rucksack and hiking boots or 4-wheel drive cars to see glaciers, waterfalls, volcanoes, geysers and wild landscapes or to bath in one of the numerous hot springs. While this is truly worth the trip across the north Atlantic, the true highlights are hidden from the eye, some tens to thousands of meters below surface. Those treasures are appreciated only rarely by tourists but attract earth scientists to come to the volcanic island to conduct research on a wide range of geoscientific topics.

One such scientist is the assistant professor for General Geophysics Eva Eibl from the University of Potsdam. And Eva loves to go to Iceland in the mid of winter. She is interested in the volcanic systems under Iceland’s surface. Those volcanic systems not only result in spectacular and dangerous volcanic eruptions but are also the source of heat for hot springs and geysers. In fact, the term geyser – today used for springs erupting hot water fountains all over the world – has its origin in the Icelandic name ‘Geysir’ for jetting thermal springs. Eva Eibl and her team now focus on geysers because of their predictability and similarity with respect to volcanoes.

Most geysers tend to have regular eruptions. Some spray their up to 100° Celsius hot water every minute, some only once a month into the air. The time between eruptions depends on the internal structure of the cracks that are filled with groundwater, rain, and erupted water flowing back after eruptions. The water within the geysers system is heated by a volcanic heat source beneath the geyser. Assuming a constant shape and volume of the water body and a constant heat supply at depth, it should take the same time to heat up this water body. Thus, on average the geyser erupts quite predictable in a regular interval. Depending on the geyser type, eruptions are triggered either when a temperature instability leads to sudden boiling in the conduit or when bubbles in a bubble trap reach a size where they are able to escape into the conduit. Both the sudden boiling and rise of a steam or gas bubble result in a spontaneous outburst of hot water and the spectacular geyser eruption.

It seems self-evident for Volcanologists to study Geysers: The structure of geyser and volcanoes are similar since they both have a heat source, chamber and conduit system. However, since geysers erupt more often than volcanoes and are more easily accessible, volcano seismologists such as Eva Eibl are interested in geysers. The initial processes leading to a geyser eruption might be similar to those leading to volcanic eruptions. In contrast to volcanoes and due to their regular eruption cycle, geysers allow studying eruptive intervals, processes leading to eruption, external influences and predictability more easily. This knowledge might be transferred to volcanoes where eruptions only happen every few years (in Iceland). While the processes leading to eruptions can be studied in detail and eruptions can be predicted with great accuracy in geysers, sometimes those eruptions do not follow those predictions. Eva Eibl and her team want to understand why the eruptions of a geyser sometimes fall out of rhythm and how the internal structure looks like. Therefore, Eva Eibl uses ground vibrations recorded by seismometers and rotational sensors.

Seismic vibrations are commonly used to create a model of the structural composition of the surface without having to dig deep holes (something that is neither feasible near a geyser nor a volcano). Geophysicists use waves to locate the source of the signal, to study the process generating it and to derive information about the structure of the ground. At geysers those signals are caused by the movement of water or bubbles in the ground and bursting of bubbles i.e. a pressure change within the system. Analyzing and interpreting those signals provide information on the pressurization and thus on the system of the geyser itself. Eva Eibl and colleagues used those signals for example to model the geyser’s internal structure in detail.

But the question still is: Why is the geyser sometimes out of rhythm? One idea is that changing weather conditions, especially changes in pressure, rain, wind speed or direction, might result in changing eruption intervals. Eibl et al. presume that wind for example alters the thermal equilibrium at the geyser’s surface by removing heat from the water body. Stronger winds will intensify this effect, leading to slightly altered thermal conditions within the geyser itself. Eva Eibl and her team therefore installed multiple sensors in the field to simultaneously record seismic as well as weather data. This is not an easy task, since using high-resolution sensors in the harsh conditions of Iceland demands highly robust technology. Now, in winter 2020, Eva Eibl installed for the first time in Iceland the new rotational sensors she purchased in September 2018 and learned if and how they can be used in an area with extreme winds, snow, frozen ground and hot water.

But why in winter? To observe the seismic waves generated within a geyser system, the seismic sensors have to be installed at a quiet location in order to being able to record tiny ground motions. The huge amount of tourists generates seismic waves by hiking near the geysers, driving big cars and buses to the geysers field in the summer month. All this noise dominates the seismic signals, rendering the sensor’s data unusable. Thus, Eva Eibl wants to install her field equipment in winter, with less background noise of tourists in this wonderful, awe-inspiring landscape. Before the hoards are back she wants to record as many data of the geyser as possible. A research goal that benefits in times of corona where less tourists explore the beautiful island and its gems.

More information on the geyser research at the Institute for Geosciences at the University of Potsdam at www.geo.uni-potsdam.de