Step by Step - Why Exercise Therapy Can Help Treat Depression 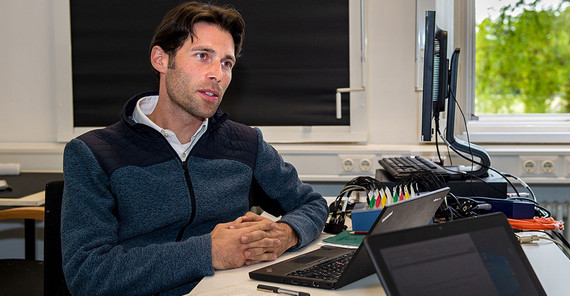 Sport not only keeps you fit but can also heal - both body and soul. The study STEP.De examines how exercise therapy can be used to treat depression. Researchers at the University of Potsdam are substantially involved in this study.

Depression is a widespread disease. An estimated five million people are affected in Germany alone. 1-2% of the population develop a depression for the first time every year. But there is a fatal shortage when it comes to the care of people with mental illness: you have to wait weeks for an appointment with a psychiatrist. It can even take four to six months before a therapy spot becomes available - a time in which nothing happens. To change this situation, scientists of a consortium of health insurance companies and research institutions are currently investigating to what extent exercise therapy can close this care gap. A fundamental advantage of exercise therapy and preventive health training is their availability. There is a very well-developed network of health sports clubs, physiotherapy practices, and rehabilitation centers throughout Germany, where you can also get short-term appointments.

There is a simple truth behind the idea: “Movement has great healing power. In addition to the positive effects on the cardiovascular system, muscles, and brain, it also has an impact on mental health. Endurance sport and weight training work as well as yoga,” explains Dr. Andreas Heißel. The sports and health scientist and movement therapist has been researching the possible uses of exercise therapy at the University of Potsdam together with the social and preventive health professional Prof. Dr. Michael Rapp for quite some time. In the previous SPeED study, the researchers examined whether psychotherapy achieved better results when patients had previously undergone sports therapy. The effectiveness of sport in treating depression has already been proven by many studies. In the meantime, there have even been some studies comparing the effects of sports and psychotherapy - with the result that both are effective but that there are hardly any differences.
This does not mean that exercise therapy can replace psychotherapy, Heißel emphasizes. They should rather work hand in hand so that patients receive help at an early stage and both approaches contribute optimally to treatment. In the current study “STEP.De”, the researchers want to find out how this can be implemented in regular care. “Exercise therapy could bridge the waiting time for psychotherapy. Ideally, however, it may also help some patients enough so they no longer need psychotherapy.”

480 patients with mild to moderate depression will participate in the study, receiving either sports or psychotherapy.“We predict that in the end we will not find any difference but that both help,” says Heißel. Then both treatments would be the best possible from the very beginning. It is important that psychotherapists accompany the exercise therapy. They confirm the diagnosis at the beginning, report every four weeks and, in a final discussion with the patient, determine how to proceed, whether subsequent psychotherapy is necessary or not.

In the meantime, there is exercise therapy, 32 units in four months. Its goals are endurance and strength at different levels of intensity but also stress relief and relaxation. All participants will take an entrance test in advance that forms the basis of an individual training plan. It takes into account, for example, whether the patient suffers from pain, which is not uncommon in depression. Most notably, exercise therapy has its own psychotherapeutic component, the scientist emphasizes: “The relationship between the patient, the therapist and the other group members is extremely important. Feeling accepted and supported and exercising with people who have similar problems can be very beneficial for healing.” In fact, the role of the sports therapist could be even more important than previously thought, says Heißel.

The therapists also learn how to deal with depression

For this reason, all participating sports therapists complete a special training in addition to their basic qualifications as sports scientists or physiotherapists. Heißel developed the training course: For two weekends, they are being prepared to be more than just a fitness trainer for depression patients. In the first part they learn everything they need to know about the clinical picture, treatment, and medication. They also acquire communication skills for dealing with patients: active listening, transaction analysis and the four-ears model, all adapted to be used in sports therapy. The second training weekend includes more exercises, especially for group supervision. “This optimally prepares the therapists for the care of patients, for example, to talk with them about what they expect from therapy and how they can achieve it.”

The therapists, however, also benefited from the training, says Heißel. “It is important that they recognize and reflect on their own behavior patterns. This not only makes them better, but also more satisfied. We are surprised at how much the therapists embrace the offer, approach it with an open mind and get involved.” The Potsdam researchers have not only developed the therapist training course. They also accompany the participants during the study. Student assessors use a questionnaire to ask patients before the beginning of therapy about their ability to work, fears, quality of life, and many other things. There are additional surveys in the middle, at the end, and 2, 6, and 12 months after the therapy. In cooperation with Prof. Stephan Heinzel from FU Berlin, they are also asked to provide information through an app about their physical activity, regulation of emotions, self-efficacy, and motivation over the four months of therapy. Thanks to modern sensor technology in most smartphones, the app can also collect information about general activity behavior. Since depression patients often withdraw, this provides valuable insights about the development of the disease.

New patients will be admitted to the study until mid-2020. In view of the results so far and against the backdrop of the SPeED study, Heißel is already convinced that the project will be successful. “There are only winners - the patients, the psychotherapists, sports therapists and the health insurance companies.”
According to the researcher, health insurance companies have long been interested in treating depression patients as early as possible because the follow-up costs of untreated depression are immense. It is therefore not surprising that as consortium partners, they helped initiate the project. Sports and psychotherapists will win new patients. Contrary to what some might fear, psychologists will not “lose” patients because the exercise therapy approach reaches a completely new clientele. “It becomes evident that we can reach people who would not actively engage with psychotherapy - but with sport.” These are mainly men between 40 and 65 who often refuse psychotherapy but so far have reacted very positively to sport therapy. “And who may afterwards be willing to open up to a psychotherapist.”

The real winners of this combination model of sports and psychotherapy would be the patients, of course, as Heißel emphasizes. “We expect that about half of them would no longer need psychotherapy after exercise therapy.” Many wanted to do another exercise therapy after completing the treatment, most of them even at the same facility or with the same sports therapist - and even at their own expense. “This commitment is a big step for the patients. It was not the aim of the study at all, but it is an indication of the long-term effect of the therapy. “Last but not least, sport can be an effective tool against the fact that a relatively large number of people suffer relapses. The remission rate for depression is about 50%. Studies have shown, however, that those who manage to stay in an activity, such as a sports course, for more than a year have a good chance of permanently integrating it into their everyday life. “Then there is a high probability that they will continue it for a long time - which could counteract the recurrence of depression."

If the study can really meet the high expectations, it should not take long until other health insurance companies take up the model. Andreas Heißel can easily imagine that the program will also be opened to other psychological diseases. After all, exercise therapy takes place in a group and does not explicitly focus on the specific disease of the individuals.

In the STEP.De study (sport/ exercise therapy for depression), researchers investigate whether exercise therapy can be used in standard care as a therapy option which can be prescribed by physicians and psychotherapists as a service covered by health insurances. It compares the effectiveness and cost-efficiency of exercise therapy to the regular prescription, psychotherapy, in the treatment of depressive disorders.
Participants: BKK VBU, BAHN-BKK, BMW BKK; BKK GILDEMEISTER SEIDENSTICKER; CONVEMA Versorgungsmanagement GmbH; Freie Universität Berlin; University of Potsdam; Sport-Gesundheitspark Berlin e.V.
Duration: 2018–2021
Funding: Innovation Committee of the Joint Federal Committee

Dr. Andreas Heißel studied sports, political and educational sciences and psychology in Potsdam, Berlin, and Sydney. Since 2013, he has been a Postdoctoral Research Fellow at the Chair for Social and Preventive Medicine of the University of Potsdam.
Mail: andreas.heisseluuni-potsdampde