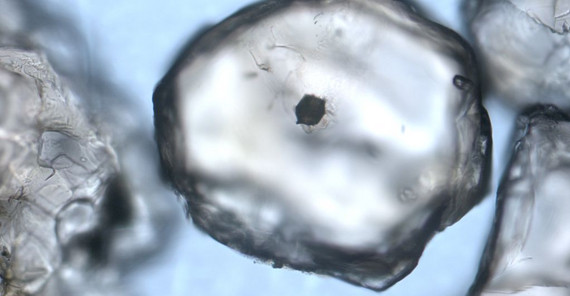 Stones move, not just in the pockets or backpacks of fascinated collectors around the world. Stones also move through rock: from the surface they get kilometres deep into the crust of the earth – and even back again. This takes millions of years, of course. But when you trace them and “listen” to them, they reveal astonishing details about the changes of the earth over millions of years. They also reveal the conditions in depths that no human being has been able to reach to date. Dr. Silvio Ferrero, Humboldt scholar at the Institute of Earth and Environmental Science, investigates these journeys.

Ferrero is a geoscientist, specialised in metamorphic rocks. Such rocks are the result of extremely high pressure and high temperature as they exist deep beneath the surface. When sediments that accumulate on the surface of the earth get into deeper layers of the earth’s crust, they change their structure depending on the surrounding conditions. Ferrero is particularly passionate about the structures that you find inside rocks, the melt inclusions. Hidden in metamorphic rock that partially melted in the depth and hardened again on the way to the surface, these inclusions bring to light the secret of their genesis. While metamorphic rock is constantly changing during its journey through the earth’s crust, the melt inclusions sometimes retain their formation conditions. This is exactly what makes them so interesting for geoscientists, as Ferrero explains. “In simple terms, they show – on a chemical level – what it looks like deep down there. Their composition and microstructural features enable us to draw conclusions on how deep the stone was at the time when it melted and trapped the inclusions.”

Ferrero is a nanogranite “hunter”. His tools are an electron microscope and microprobes. The inclusions that he examines are very tiny, just a few micrometres, i.e. a thousandth of a millimetre. This is just right for him. “I have always been more interested in the micro-level. I think that is where the secret of things lies. Of course, sometimes you have to step back a little and see the results as a whole. To eventually understand the development of these stones means more: it is like a look into the geological history of the earth.”

Silvio Ferrero comes from the Piedmont in the north-west of Italy. There the Alps are almost at your doorstep and you grow up with them. When he was a schoolboy, Ferrero worked as a stonemason during his holidays. This was the beginning of his passion that took him straight to university. During his geology studies in Turin, it became more refined: from the big to the small, from the field to laboratory. And he also developed his enthusiasm for research. After completing his master’s degree, he had to ask himself the question: business or science? It did not take Ferrero very long to decide. “If I had gone into the world of business, I would have had the chance to travel the world, looking for petrol and other raw materials. But that would have meant saying goodbye to those things that I highly value: science, the exploration of the smallest details and putting them in a larger context. And I did not want that.”

The opportunity to take up a career in research came in 2007 when he started work at the Geoscientific Department of the University of Padua. A research group was looking for tiny melt inclusions in metamorphic rock there. His experience in laboratory work opened the doors for Ferrero. “During my studies, all people literally pounced on fieldwork research while I felt much better in a laboratory for the most part. In Padua they were looking for someone who had experience with microscopes.”

It is not easy to find nanogranites; to ‘read’ them is even more difficult. Until today, about ten verified occurrences are known from just as few sites. When Ferrero started his research in Padua, there had been just two. The team works with rock samples from a once active volcanic region in the south of Spain as well as with samples from the southern Indian province of Kerala. While the rock from Spain was taken to the surface by a volcanic eruption in a relatively short span of time, the samples found in Kerala came to light from a depth of about 25 kilometres over a period of many million years. What they had in common was their very special interior – both crystallised and glass inclusions that researchers were finally able to identify. The samples are cut into thin slices, between 100 and 250 micrometres thick. With such a thickness, the scientists were able to discover something. “We needed technologies with extremely high resolutions, both for the microscopes and the chemical analytical tools, to characterise the inclusions,” Ferrero says. “Finally, we examined already known samples, ‘old stones’, with a much higher resolution than ever before – and were able to characterise the inclusions much more precisely.” The special achievement: the scientists were able to describe products and processes – structurally and chemically – that take place in the inaccessible depth of the earth. Melting these inclusions again under laboratory conditions makes it possible to determine those conditions under which the nanogranites were originally formed – and which still determine the geological development of the earth. “You can say that we have found very old glass. Of course, it is much more than just glass. The inclusions tell us what is happening down there. And this, in turn, allows us to draw conclusions on how the earth’s crust develops and how mountains are formed.”

Meanwhile, the number of sites and samples of nanogranites is increasing. After he had finished his PhD in 2010, Ferrero worked on extending the database of known nanogranites. On a volcanic island off the coast of Tunisia, he gathered new samples. “At that time I was out in the field again,” he says and laughs. “Although it is impossible to take all samples myself, it is important for me not just to work in the lab."

In Potsdam, where he has been a guest lecturer at the chair of petrology of Prof. Patrick O’Brien as a fellow of the Humboldt Foundation since November 2012, Ferrero looks even deeper into the earth: into the Bohemian Massif to be exact. “This is one of the most complicated regions in Europe,” he says, “at least when it comes to my field of work.” Just recently, some rocks with micro-diamonds were found in the Bohemian Massif. Their structure and chemical composition suggest that they got to the surface from a depth of about 120 kilometres. Ferrero hopes to find inclusions in them as well and to be able to examine and determine them more precisely. Thanks to this rock, which is millions of years old, new questions might arise for Ferrero’s project during his stay in Potsdam, questions that he cannot predict today. “The entire field of research in which I am working is so new, so comprehensive that it has been developing at a tearing pace.”

Ferrero needs a certain freedom to be able to undertake this research. The scholarship of the Humboldt Foundation gives him such freedom. For him this is a lucky chance, as he emphasizes himself. The type of basic research that he pursues requires the courage to ask questions without already knowing the result. “The perfect situation for a geoscientist would be a talking stone,” Ferrero says. “But such a thing does not exist. This is why we work a bit like detectives: we formulate a theory based on what we observe in nature, and then we work to find more data to prove –or disprove- our theory. ”

Dr. Silvio Ferrero studied geology in Turin and then did his PhD in Padua. He has been at the Institute of Earth and Environmental Science of the University of Potsdam as a fellow of the Alexander von Humboldt Foundation since November 2012.