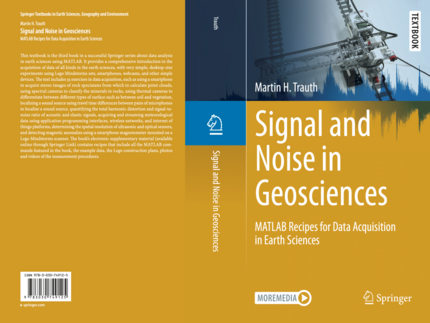 Martin H. Trauth from the Institute of Geosciences has published his third textbook on data analysis in the geosciences with SpringerNature. After the books "MATLAB Recipes for Earth Sciences, 5th Edition" and "Collecting, Processing and Presenting Geoscientific Information", he now presents a book on data acquisition entitled "Signal and Noise in Geosciences". The new textbook “Signal and Noise in Geosciences” (Springer 2021) introduces methods of data acquisition in geosciences using MATLAB together with inexpensive data acquisition systems, such as the sensors on board of smartphones, sensors that come with the LEGO MINDSTORMS set, webcams with stereo microphones, affordable spectral and thermal cameras.