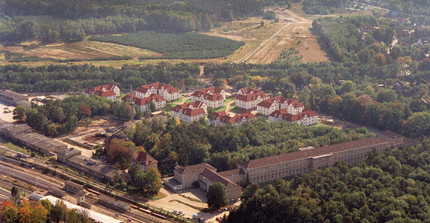 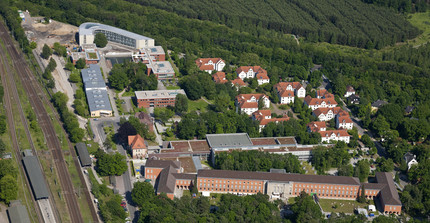 The Griebnitzsee campus is home to the Faculty of Economics and Social Sciences and the Law Faculty. The academy of political science and jurisprudence of the GDR resided on this site from 1952 to 1991. When the academy was closed the University of Potsdam took over the premises. Since then the campus has grown enormously and several buildings have been added to the already existing ones. Apart from a huge building for the two faculties, the institute of computer sciences also moved into a new building. 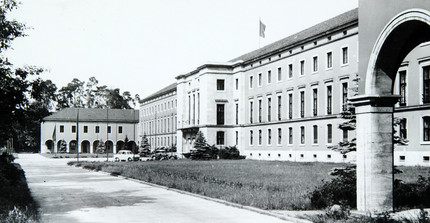 Main building of the Academy for Administration and Law of the GDR in Babelsberg, 1960s 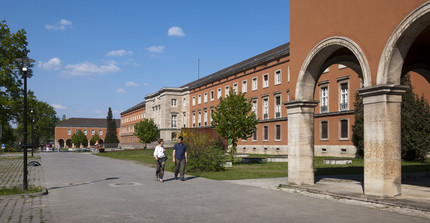 Main building of the Griebnitzsee Campus, 2011

The main building on Griebnitzsee campus provides an almost cinematic front. The heart of the premises is the oldest and most impressive building on the spot. The whole area was in possession of the German Red Cross since 1896. The magnificent building was erected between 1939 and 1943 and was used as head quarters in the last years of World War II. A few years after the war the German Administration Academy moved to Babelsberg and stayed – later as Academy of Political Sciences and Jurisprudence – until 1989. Its presidential exterior and its national socialist history actually played a (leading) role in the 1980s again: during the shooting of the film "Mephisto" directed by István Szabó. 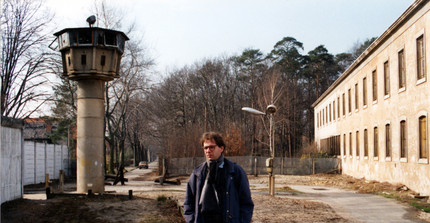 Guard tower at the border between East and West Germany in Potsdam-Babelsberg, 1989 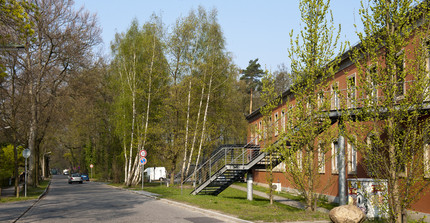 At the border between Potsdam and Berlin, 2011

Due to its location between two railway tracks leading to West-Berlin as well as its direct neighbourhood to the enclave "Steinstücken" the area of today's Griebnitzsee campus had been borderland since 1945. This became highly visible when the Berlin Wall was built in 1961: it encompassed almost two thirds of the whole site, which seemed to protrude like an arrowhead into the "class enemy's" territory. At some points the Wall ran only a few meters in front of the buildings und cut through properties and paths likewise, lined by watchtowers. Today the streets are reconnected and the once deserted sand strip is now the site of the university's new buildings. 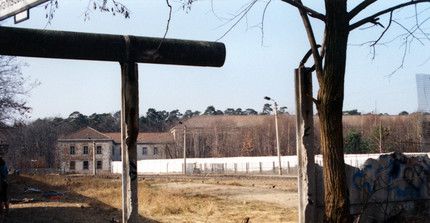 “Death strip” around the Academy for Administration and Law, 1989 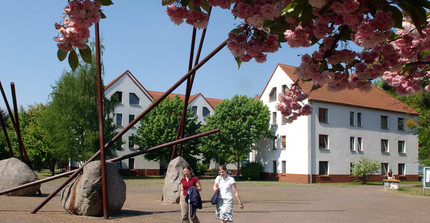 The Berlin Wall ran south of the main building until 1989 and all around spread the bare sand strip of the forbidden zone. Soon after the fall of the Wall the so called "wallpeckers", people who hacked pieces out of the Wall as souvenirs, started to perforate the ramparts, and soon cleared it away completely. Where there were once border patrols there is a student village today. It is one of seven residential halls run by the "Studentenwerk", the student services office. In the nine houses on campus Griebnitzsee there are 543 rooms altogether. Outside of the students rooms there is still a border, but today it’s only the city limit between Potsdam and Berlin. Buildings at the time of the German Red Cross; home of the Faculty of Economics and Social Sciences, 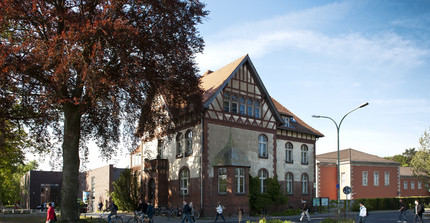 Institute building at the Griebnitzsee Campus with new lecture hall, 2011

Soon after the university took over the premises in Griebnitzsee in 1991, the Faculty of Economics and Social Sciences moved there. Especially the two buildings in the traditional local style became the faculty's trademark. But since the new lecture building was finished in 2007 the students primarily use the additional rooms. Raw concrete on the inside and reddish-purple bricks on the outside complement the existing multi-faceted historic ensemble gently but visibly.