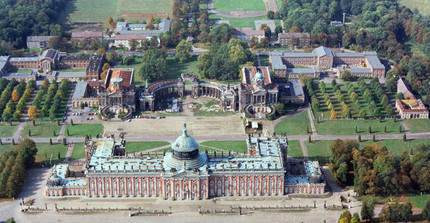 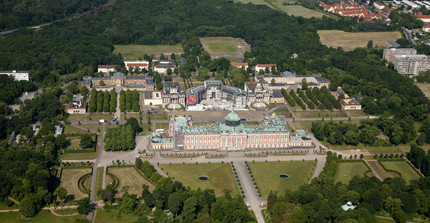 The largest of the three campuses is located at the outskirts of Potsdam, in Golm. In the 1930s barracks were established on the site and used by the air force intelligence until 1945. From 1951 the Ministry for State Security used the premises for the so-called "Juristische Hochschule Potsdam-Eiche", a law school. Jurists were educated here for their service in the Ministry for State Security until 1990. Since the foundation of the university it houses mainly the Faculty of Human Sciences and the Faculty of Mathematics and Natural Sciences. Together with the institutes of the Potsdam-Golm Science Park it is Brandenburg's largest research site. 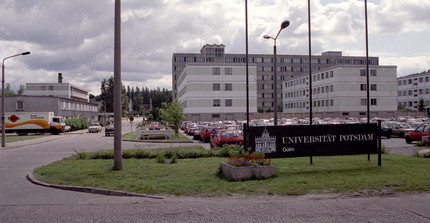 Entrance area of the Golm Campus, 1993 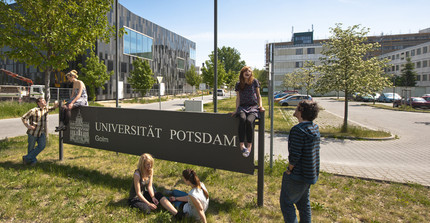 Students at the entrance to the Golm Campus, 2011

With about 20.000 students the University of Potsdam is one of the medium-sized universities in Germany. Founded in 1991, with five faculties spread out over three campuses it has grown ever since. Almost every building of the university has been renovated or remodeled since the foundation and many new ones have been built: laboratories, lecture halls and class rooms, offices and libraries. Numerous building projects can be realized because of the raising of third-party funds. Others are financed with the help of the university society. Twenty years after its foundation the university is on the go. 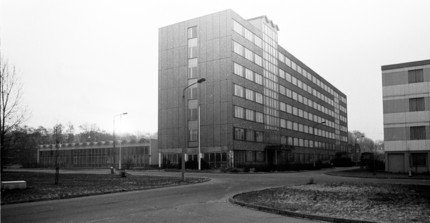 Main building of the “University of Law at Potsdam-Eiche,” 1989 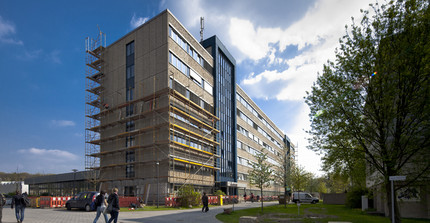 Main building of the Human Sciences Faculty under construction, 2011

The most prominent building at the entrance of Golm campus used to be part of the former law school. Today a very different discourse is taking place here. It is the main building of the Faculty of Human Sciences and houses first and foremost the Department of Educational Studies and the Area of Excellence: Cognitive Sciences, their offices and laboratories. One of those is the BabyLab, where the youngest are at the centre of research. Their abilities, their language and their ways of thinking are explored in various research projects. And that is only the beginning, not only for the babies. 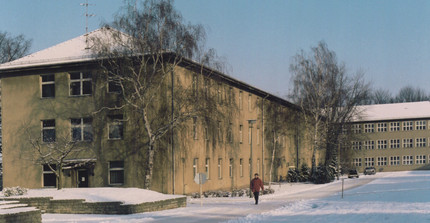 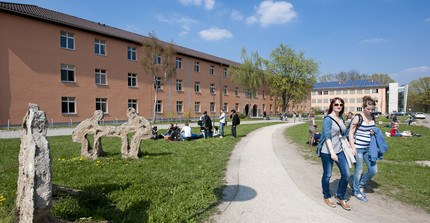 Apart from science there is also music in Golm. Since the foundation of the University of Potsdam most of the buildings on campus have been renovated completely, because some of them have been existing since the 1930s. In those historic buildings, which had been planned as military barracks, resides the Institute of the Human Sciences including the department of teacher training and musicology. The musicology even has a chamber music hall available. Furthermore the institute of earth and environmental sciences resided on campus Golm. The military does no longer dominate here. Instead Golm has come closer to the big, wide world. 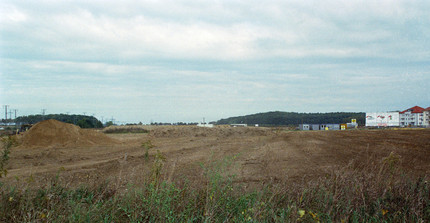 Construction site for the natural sciences complex in Golm, 1997 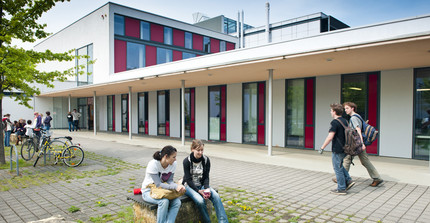 The chemistry building at the Golm Campus, 2011

After the foundation of the university it was decided that the Faculty of Mathematics and Natural Sciences should take up a long-term residence in Golm. Apart from the historic buildings, where the Faculty of Human Sciences resides today, only one thing existed in Golm back then: a green field. So today's central part of the campus arose completely new. Four huge buildings have been built in the last years for the several institutes, equipped with modern laboratories, lecture halls and offices. And other buildings are planned. Fortunately, the green field in Golm still begins behind the last building.