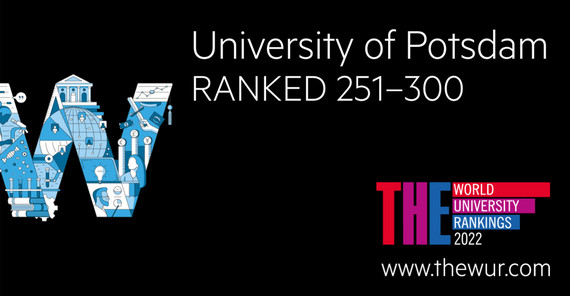 Photo : THE
University of Potsdam among 300 Best Universities Worldwide Again in THE Ranking

At the very top for the sixth year in a row is Oxford University (UK), while two Chinese universities are included in the top 20 for the first time (Peking University and Tsinghua University). Germany is the third strongest nation among the top 200 again this year. The THE ranking, as well as the Academic Ranking of World Universities (ARWU) and the QS World University Ranking, are considered to be among the world’s most important higher education rankings. THE rankings focus on five criteria: teaching, research, citations, knowledge transfer, and international reputation. The University of Potsdam is roughly on par with the University of Colorado Denver (USA), Beijing Normal University (China), the University of Duisburg-Essen, and the partner university Stellenbosch (South Africa), all ranking between 251-300.

“The efforts of recent years to further the university’s development are clearly bearing fruit – we have now achieved a sustainable position among the top third of all German universities. We are also in good company in the international context alongside universities with comparable ratings such as the University of Colorado or Stellenbosch/South Africa. In the years to come, we want to continue our ascent – in teaching, research, and transfer. That is also what we discussed with the state government, although this can only work, of course, if the financial resources of the universities do not suffer,” says Prof. Oliver Günther, Ph.D., President of the University.

Vice President for International Affairs, Alumni and Fundraising at the University of Potsdam, Prof. Dr. Florian J. Schweigert, emphasized how important digital offers will be in the future for the excellence of the university, especially in light of the crisis: “For universities worldwide, the pandemic was and is a watershed moment for internationalization; mobility, in particular, was only possible to a limited extent or in virtual settings and partnership work also took place through digital networking, above all. So far, we have developed a good blend of digital and real-world mobility. It must now be our goal to not just gradually return to our old form, but to continue to use and develop our innovative formats so that we can continue to do very well in the International Outlook of the ranking in the years to come.”