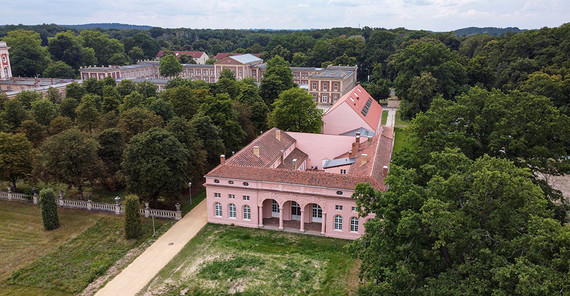 In the presence of German Federal President Frank-Walter Steinmeier, Minister President of the State of Brandenburg Dietmar Woidke, and Minister of Science, Research, and Culture of the State of Brandenburg Manja Schüle, the European Center for Jewish Scholarship will be inaugurated at the University of Potsdam on August 18, 2021. H.E. Jeremy Issacharoff, Ambassador of the State of Israel to the Federal Republic of Germany, has confirmed his attendance, as have Dr. Josef Schuster, President of the Central Council of Jews in Germany, and Sonja Guentner, President of the European Union of Progressive Jews.
The School of Jewish Theology at the University of Potsdam and the two rabbinical seminaries – the Abraham Geiger College and the Zacharias Frankel College – will have a new home at the European Center for Jewish Scholarship on Potsdam’s Am Neuen Palais campus. After the conversion of the former Orangery and the historic North Gate Building, a modern building for teaching and studying, which includes a synagogue, has been created vis à vis the New Palace in Sanssouci Park. As part of the celebration, the Torah scrolls will be placed in the synagogue – the first in Potsdam since the end of World War II.
Representatives of the media are cordially invited to the inauguration, which is one of the highlights of the “1,700 Years of Jewish Life in Germany” celebration this year.

When the School of Jewish Theology was founded at the University of Potsdam in 2013, the call for equal rights for Jewish theologies with Christian and Islamic theologies was answered after almost 200 years. The fact that the School of Jewish Theology will now move into its own building with the two rabbinical seminaries on Am Neuen Palais campus emphasizes the firm integration of the program, which is unique in Europe, into Potsdam’s university operations. It is a faith-related program, but it is open to interested students regardless of religious affiliation. About 80 students are currently enrolled, 31 of whom are pursuing a rabbinate or cantorate.

The building ensemble, built in 1769 based on plans by Carl von Gontard for castellans and court gardeners, is part of the UNESCO World Heritage Site “Palaces and Parks of Potsdam and Berlin” managed by the Prussian Palaces and Gardens Foundation Berlin-Brandenburg, and has been extensively renovated and redesigned according to designs by the office of Rüthnick Architekten in Berlin. The training seminary for rabbis and cantors will move into new rooms for teaching, research, and administration in the North Gate Building. The School of Jewish Theology will move into the Orangery. Both institutions are connected to one another by the synagogue.

An independent new building has been integrated into the Orangery with an appropriate distance to the historic facades. The original shape of the building becomes visible again thanks to the glass facade, large parts of which can be opened during the warmer seasons. It also provides space for the winning artwork of the “Kunst am Bau” (Art within Architecture) competition: “This is not a Thornbush.”  by Eva Leitlof. The motif, a thornbush, dissolves into its individual parts – monochrome squares – through enlargement. The image generated in this way was applied to the individual glass panes. The thornbush remains as an idea, but is not recognizable as such in the image.

On behalf of the state of Brandenburg, the Brandenburg State Office for Real Estate and Construction (Brandenburgischer Landesbetrieb für Liegenschaften und Bauen) managed the renovation and expansion of the former royal court gardener’s house, the adjacent stables, and the Orangery at a cost of around EUR13.5 million.

Note for the media:
For your accreditation, please register by e-mail, including your last name, first name, date of birth, place of birth, and name of the medium you work for as well as a copy of your press card, by no later than 12 noon on Monday, August 16 to: presseuuni-potsdampde.

European Center for Jewish Scholarship Inaugurated at the University of Potsdam