Anatomy of a catastrophe – International study to February 2021 Uttarakhand disaster 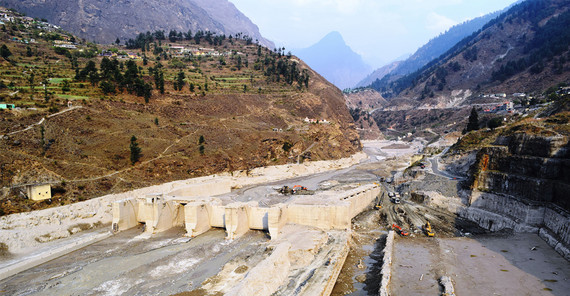 Photo : Irfan Rashid, Department of Geoinformatics, University of Kashmir
Destroyed Tapovan Vishnugad hydroelectric plant after devastating debris flow of Feb 7, 2021
The 2021 Chamoli disaster in the Indian Himalaya was triggered by an extraordinary rock and ice avalanche and debris flow, that destroyed infrastructure and left more then 200 people dead or missing. A detailed analysis of the flood and landslide showed that climate change makes mountain disasters more likely in areas of increased development. The study by an international team of scientists with participation of the University of Potsdam was now published in “Science”.

On February 7 2021, the Chamoli district in the Uttarakhand region of India experienced a humanitarian tragedy when a veritable wall of rock and ice collapsed and formed a debris flow that barreled down the Ronti Gad, Rishiganga, and Dhauliganga river valleys. The massive slide, caused when a wedge of rock carrying a steep hanging glacier broke off a ridge in the Himalayan mountain range, and the resulting debris flow, led to the destruction of two hydropower generating facilities and left over 200 people dead or missing.

A self-organized coalition of 53 scientists, lead by the University of Calgary, came together in the days following the disaster to investigate the cause, scope, and impact of the flood and landslide. Their study, which analysed satellite imagery, seismic records, and eyewitness videos to produce computer models of the flow, was now published online in the journal “Science”.

Dr. Wolfgang Schwanghart from the Institute of Environmental Science and Geography, co-author of the study, praises the international collaboration: “Shortly after the event, numerous scientists had gathered – mostly via social media and virtual meetings – to work together with the aim to better understand the event. This has been extraordinary. Each member of the team contributed with his or her expertise which enabled an efficient and thorough reconstruction of the event cascade.”

While initial suggestions pointed to a glacial lake outburst flood, the team confirms that there are no glacial lakes of any size large enough to produce a flood anywhere near the site. The paper provided satellite evidence that previous large ice masses had been dislodged from the same ridge and struck the same valley area in recent years. The researchers suggest that climate change is contributing to such events happening more frequently, and that the greater magnitude of the latest disaster is an argument in favour of avoiding further hydropower developments in the area.