Blue and Lonesome – The rarity of blue antelopes in museum collections 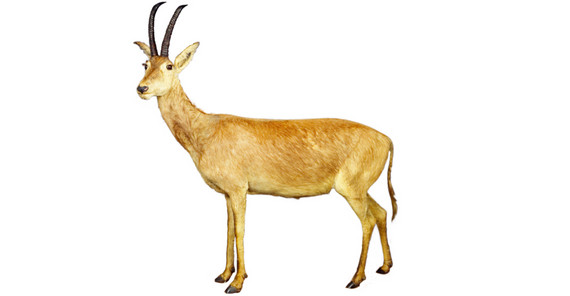 Photo : NHM Vienna, Alice Schumacher
The only mounted skin of a female blue antelope can be found in the Natural History Museum Vienna.
Genetic research has shown that far fewer specimens of the blue antelope exist in museum collections than previously thought. An international team of scientist led by the Museum für Naturkunde Berlin and the University of Potsdam examined collection material of the extinct blue antelope. The study, published in Scientific Reports, demonstrates the potential of archival DNA to identify contentious specimens in museum collections. The genetic data is available to scientists globally.

The blue antelope (Hippotragus leucophaeus) was an African antelope whose pelt was perceived to be bluish-grey. It is the only large African mammal species to have gone extinct in historical times. Its distribution might have already been limited when European colonists arrived in South Africa during the 17th century, and while they surely played a role, the exact reasons behind its decline are still being investigated. These range from overhunting to competition with livestock to fragmentation of migration routes.

The last blue antelope was shot in 1799/1800 about 34 years after it was described scientifically. Today only about 16 specimens are known from museum collections, of which several are taxonomically contentious. A team of scientists led by the Museum für Naturkunde Berlin and the University of Potsdam examined 10 of the 16 potential blue antelope specimens from 9 museum collections around the world in order to identify their species identity with certainty.

Only 4 of the 10 studied specimens turned out to actually belong to the blue antelope and not a single skull is among them. This renders the blue antelope one of the scarcest historical mammals in museum collections. It is, for example, far rarer than the famous Steller’s sea cow (more than 89 specimens) or the quagga, a subspecies of the plains zebra (~34 specimens).
The study illustrates clearly how archival DNA can be used to identify rare species in museum collections when comparative material is unavailable and diagnostic morphological features are unclear.
An analysis of the mitochondrial genomes shows a rather low maternal diversity in the blue antelope. This might confirm earlier hypotheses that the population size of the blue antelope was already low at the time of the European colonization of South Africa.

Figure: The only mounted skin of a female blue antelope can be found in the Natural History Museum Vienna. Photo credit: NHM Vienna, Alice Schumacher