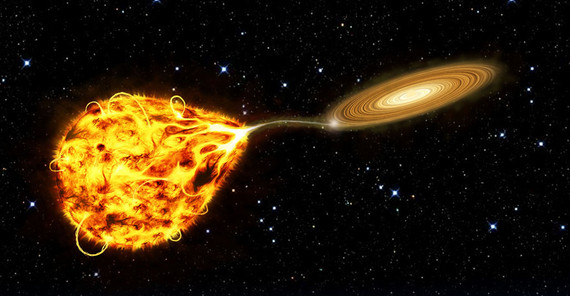 Photo : Joris Vos
Artists view of mass loss from a red giant star due to gravitational pull of its solar-like companion.
The orbits of double stars are a direct consequence of how the Milky Way evolved with time. This important observation will constrain the Galactic evolutionary history in new ways, Humboldt Fellow Dr. Joris Vos from the Institute of Physics and Astronomy believes.

Double star systems consisting of small hot blue stars and stars similar to our sun are the research objects of a study highlighted recently in “Astronomy & Astrophysics”. In this study, authors from the University of Potsdam, Lund University (Sweden) and Universidad de Valparaíso (Chile) report about stars orbiting a common center of mass. The small hot blue stars, called hot subdwarf B stars, are cores of red giant stars which have recently lost their outer layers due to gravitational pull of their solar-like companions and ignited helium. Our Sun will also become a red giant star once it burns up its hydrogen fuel. “The orbits of the binaries show a strong relationship between their periods and masses which has been very hard to explain with known models of stellar interactions”, says Joris Vos from the Stellar Astrophysics Group, the first author of the study, “We have found that the orbits of our binaries are a direct consequence of how our Galaxy evolved with time.”

When the Milky Way formed, the stars in it contained very little iron, whereas the presently-formed stars are more iron-rich like the Sun. The difference in iron content makes red giant stars, as well as the resulting orbits, larger by up to 30 per cent. The orbital periods of the binaries can be fully explained by a combined model of stellar interactions and the temporal evolution of the amount of iron in the Milky Way. Joris Vos points out: “This is the first time we have demonstrated that there is an observable connection between the chemical history of our Galaxy and observations and modelling of evolved binary stars.”

Both the University of Potsdam and the Lund University are involved in the 4MOST survey (ESO) that will deliver spectra, compositions and ages of twenty million stars. Lund University is further involved in the Gaia mission (ESA) that has mapped the positions of more than two billion stars in the Galaxy. “We expect that the new detailed models of our Galactic history will and should be used to make detailed predictions of the binary populations in it. This, in turn, should be connected to the various observations of Milky Way binaries. Finally, we hope to show the community that there is a lot of new information which can be gained by having more interdisciplinary communication between the different fields of astronomy”, Joris Vos sums up.