After gaining an overview of the landscape of philosophy during your bachelor's degree, a master's degree in philosophy at the University of Potsdam will allow you to develop your own philosophical voice.

1. ... you want to study in a close-knit community with opportunities for individual development.
2. ... you will enjoy regularly presenting and discussing your own philosophical research in a constructive setting.
3. ... you want to work in a context strongly informed by international ties.
4. ... your research interests reflect the department’s areas of specialization, or you wish to benefit from the department's diverse interdisciplinary research interests.

Johannes Haag holds the Chair for Theoretical Philosophy. His dissertation examined the relationship between perception, self-knowledge, and introspection, and his habilitation presented a conceptual interpretation of Kant inspired by Wilfrid Sellars. The systematic approach to Kant’s transcendental philosophy and the philosophy of German idealism continues to form a central research focus for Haag, as does the philosophy of Wilfrid Sellars and the philosophers following him. He also works on early modern philosophy. These focus areas also reflect the current research interests of the chair's research fellows and doctoral students. Current research projects include analytic theories of perception, various topics in Kant and Hegel, Sellarsian issues, and neopragmatism.

The Chair for Ethics and Aesthetics, held by Logi Gunnarsson, is closely connected to the William James Center and the Center for Human Rights at the University of Potsdam. A wide variety of topics are researched at the chair. Gunnarsson wrote his dissertation on metaethical issues in John McDowell. Further monographs examine Wittgenstein, the problem of personal identity, and the philosophy of philosophy (in progress). The research fellows and doctoral students of the chair currently work on a range of questions within moral philosophy (the critique of moral practice, the explanation of morality, and ethical naturalism according to Foot), and on topics such as self-knowledge, philosophy of human rights, perspectives on knowledge, and the relationship between philosophy and literary form.

The Chair for Philosophy with a focus on Applied Ethics is held by Felicitas Krämer, who received her doctorate from Heidelberg University with a dissertation on William James' understanding of reality, and subsequently specialized in applied ethics. Krämer’s current research interests include problems in bioethics (especially medical, neurotechnology, and biotechnology ethics), theories of emotion in ethics and philosophy of mind, and meta-ethical theories of neo-sentimentalism. Currently, she is particularly focused on the ethics of reproductive medicine. She is primarily concerned with the moral legitimacy of egg and sperm donation and the ethical issues arising from these practices (ethics of new family forms). Researchers at this chair also focus on the issue of obligations toward future humans and the non-identity problem. Other research topics include animal ethics, political philosophy (above all, ethical issues in international politics), and supererogation.

In addition to the researchers attached to each chair, three adjunct professorships enrich the research at the institute:

The chairs share certain thematic interests, particularly in pragmatism, such as the philosophy of Sellars, McDowells, James, or Dewey.

… regularly presenting your own arguments and writings in small-group tutorials, with personal advising from a professor.

… discussing your longer papers with fellow researchers in departmental colloquiums.

… preparing for an academic career by gathering your own teaching experience under the supervision of a professor.

… connecting your own work to non-philosophical fields in Master’s degree modules such as "Philosophy beyond the University" and "Interdisciplinary Philosophy."

For more information on the application process and structure of the Master's degree program at the University of Potsdam’s Department of Philosophy, please click here.

When was the Master’s program founded? The Humanities Faculty at the University of Potsdam initiated its Master's degree program in Philosophy in the winter semester 2007/08.

Who should apply for a Master’s program? The program is aimed at students with the following professional goals: 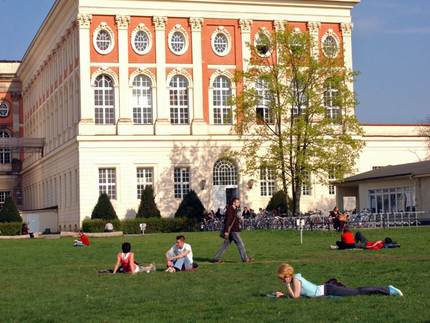 Where is the department located?

The Department of Philosophy is located in the Communs, the business buildings of the New Palace, at the front of Park Sanssouci.

The city center of Potsdam is about 2 km away. Local trains run to Berlin every half hour directly from Park Sanssouci.

Subject advisor for applicants interested in an MA in Philosophy:

Subject advisor for registered students in an MA in Philosophy: