Ranging from the molecular and cellular scale to tissues, organisms, and whole ecosystems, the complexity of living systems poses some of the most fundamental challenges to current scientific research. In the Biological Physics Group, we focus on the level of individual cells, where we address biological questions with the tools of physics, relying, in particular, on microscopy and micromanipulation techniques as well as on the ideas and concepts of pattern formation in nonlinear systems. 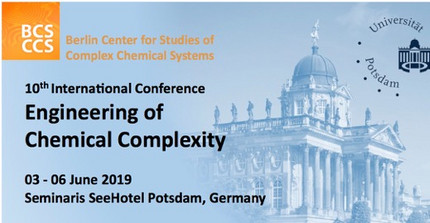 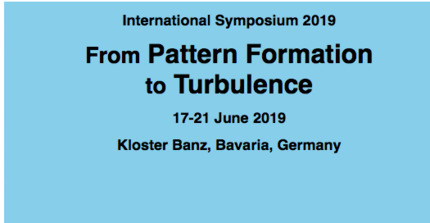 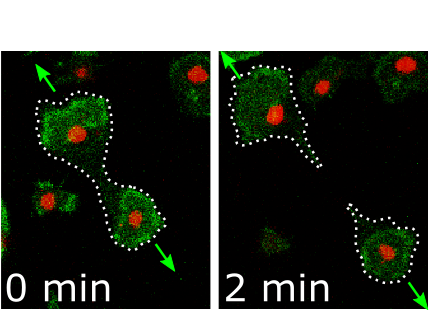 The Biological Physics group led by Professor Carsten Beta at the University of Potsdam has, in cooperation with Spanish scientists, discovered a new form of cell division caused by intracellular protein waves. It could be employed in synthetic biology in the future, for example in artificial cells. The group has now published its results in PNAS.

Cell shape is determined by a protein structure – the cytoskeleton. One of the most important proteins of the cytoskeleton called actin forms branched filament structures, which are continuously modified and reorganized by the cell. The filaments can increase or decrease in size and thereby cause the cell to change its shape. This mechanism is fundamental to the movement of white blood cells, for instance, but also for that of metastasizing tumor cells.
With the help of molecular genetics, the cytoskeleton can be rendered visible under a microscope. Biophysicists at the University of Potsdam have made use of this in order to observe dynamic changes in the cytoskeleton of Dictyostelium discoideum amoeba cells. Given certain conditions, clusters of cytoskeletal proteins can move through the cell in the form of a wave. When such a protein wave reaches the cell border, it pushes the membrane that surrounds the cell outwards. The resulting deformation eventually leads to the creation of a separate daughter cell the size of the filament wave.
In conventional cell division, also called mitosis, daughter cells are formed when they pinch off with the help of a contractile protein ring. This process is highly complex and requires a lot of coordination, for instance, in terms of the correct positioning of the protein ring. The advantage of the type of cell division now discovered by the scientists from Potsdam is that it is likely to be easier to reproduce in a laboratory. For current efforts to create artificial cells in the laboratory, in particular, this cell division driven by protein waves could offer a promising alternative. The Potsdam-based team’s Spanish cooperation partners from the Universitat Politècnica de Catalunya in Barcelona were already able to demonstrate this in a computer simulation. They developed a model which helped them reconstruct wave-mediated cell division in simulated cells, thereby creating a clearer understanding of the conditions that are necessary for this process.

Image: Video microscopy of a wave-mediated cell division in an image detail with a size of 0.05x0.06 millimeters. Protein waves are colored green, cell nuclei are red. The waves move in the direction of the arrows and separate the cell into two daughter cells. Image:  Dr. Sven Flemming (modified image from Flemming et al., 2020, PNAS)

Colloquium on Complex and Biological Systems

Colloquium on Complex and Biological Systems