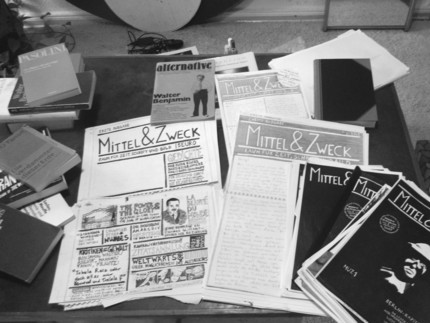 Mittel und Zweck (MUZ) is a literary magazine founded by Moses März and Philipp Meyer in 2018. MUZ is conceptualised as a platform for young writers who are interested in exploring the intersection of postcolonial theory and minor traditions of German literature. Its title is inspired by Walter Benjamin's essay A Critique of Violence in which Benjamin calls for a reconsideration of the relationship between the means and the ends with regards to new forms of work and revolutionary political action.

The inaugural issue MUZ1: Berlin – Kapstadt was published in August 2018 with financial support from the RTG Minor Cosmopolitanisms. It comprises a selection of literary texts, essays, long-form journalism, maps and comics produced by Moses and Philipp. Underlying the different themes of the issue is an interest in different forms of writing (photocopying, transcribing, citing, erasing, emails, postcards, typewriting) and, on another level, a conversation among two friends who are based in Berlin and Cape Town.

Seeking to bridge the separation between form and content, and experimenting with a different lay-out in each of its issues, MUZ borrows both from the tradition of self-made zines and more established literary publications. A particular influence in that respect has been the Cape Town based Pan-African literary magazine Chimurenga, with which Moses has collaborated for several years before he moved to Berlin to join the RTG in 2016.