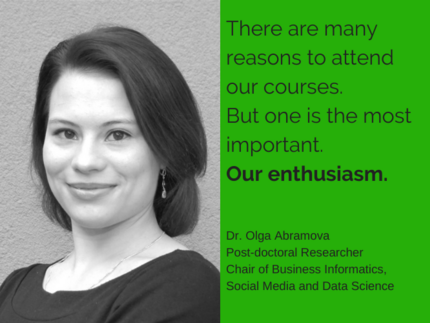 Olga Abramova has joined the University of Potsdam as a research assistant in 2017. From February 2020, she is as a post-doctoral researcher.

Olga Abramova studied Economics at Higher School of Economics (Russia) from 2007 to 2013 where she gained first research experience at the Laboratory of Investment Analysis (2009-2011). She graduated Master's Program in Economics and Management Science (MEMS) at Humboldt University in 2014. In her Master Thesis, written in cooperation with the Technical University of Darmstadt, she investigated the value of personal information from a user’s perspective when installing third-party applications. As the continuation of successful collaboration, she became a doctoral candidate and a research assistant at the Software Business & Information Management Department at the Technical University of Darmstadt, where she has successfully defended her Ph.D. thesis in January 2020.

Her primary research expertise lies in the investigation of uncertainty on sharing economy platforms. Other research projects include uncovering “the bright and dark sides” of modern ICTs (e.g., the mechanism of addiction and the effects of ICT use on behavioral, psychological and relational outcomes).

Faculty of Economic and Social Sciences