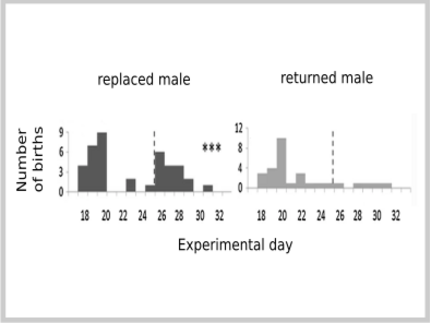 The adaptive value of many behavioural processes may relate to very specific biological or social situations. The Bruce effect reported from different mammalian taxa describes the blocking of an early pregnancy in reaction to the confrontation to a new, unknown male. It probably has high energetic costs for the female, especially if a broader, less mechanistic definition of the pregnancy termination also in later stages of the pregnancy is applied. The adaptive value has been debated as a counterstrategy to potential future infanticide by the new male (infanticide avoidance hypothesis), but also lab artefacts were considered since in rodent species the effect was reported only from laboratory conditions. We (Eccard et al. 2017) showed in rodents in experimental, near natural conditions that the Bruce effect was restricted to isolated, breeding pairs and may be adaptive in fluctuation rodent populations during low density phases. We also found that half of the test females replaced pregnancies when encountering a new male while the other half did not, which raised questions about the adaptive value and biological function of the process, potentially in mate choice.

In the proposed project we experimentally disentangle potential adaptive and mechanistic explanations for pregnancy replacements, focussing rather on the replacement than the termination function, using a small rodent system in near natural, controlled conditions. Low population density forces females to reproduce with their relatives, but in the event of encountering a migrant male, pregnancy replacement may allow the female to increase her genetic dissimilarly to sire (inbreeding avoidance). Further, the process could be a mechanism of sequential mate choice and should thus

depend on the relative quality of original and replacement male (male quality). Hypotheses will be tested in near natural conditions, and infanticidal tendencies of each male will also be monitored. Further, the dynamic interaction of the animals will be tracked with proximity loggers to reveal triggers of pregnancy replacement, e.g. mate guarding, harassment, avoidance (behavioural, mechanistic explanations).

The project is funded by the German Research Foundation (DFG) and will start in April 2022.