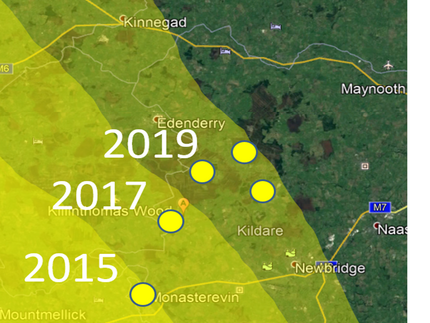 Photo: Recent movement of the expansion edge in the Midlands

When invasive species expand their geographic range into an area empty of conspecifics, they are confronted with other species that may be competitors or predators. Individual behaviour at the expansion front may thus be under different selection pressures than behaviour at the centre of the distribution, where competitive behaviour towards conspecifics is an important fitness determinant. We investigated behavioural traits of bank voles (Myodes glareolus) in an invasive population accidentally introduced to vole-free Ireland a century ago, and currently expanding at a rate of 2-3 km per year. We hypothesized that animals at the edge of the expanding distribution would be bolder explorers than at the centre. Voles latencies to emerge, activity, and risk taking was measured using a combined dark-light and open field test. We sampled behaviour of animals at 3 edge sites occupied for 1-3 years, and two central sites occupied for over 80 years. A total of 200 animals were tested in 300 tests, and sites were revisited after two days and after 2-4 weeks. We found that most behavioural variables were repeatable within individuals. We found that at the expansion front voles were more careful than animals at the centre of the distribution, but if tested a second time they were bolder than the first time, and boldness improved to a greater degree than at the centre. Contrary to our initial expectations we found that rodents in expanding populations showed careful and timid behaviour, maybe to avoid competition with other rodent species or evade predation, and individuals were adjusting quicker to the test situation than rodents in the centre of the distribution. Maybe shyness together with behavioural flexibility explains why rodents are a very successful taxon coping with displacement worldwide.

Photo: Recent movement of the expansion edge in the Midlands