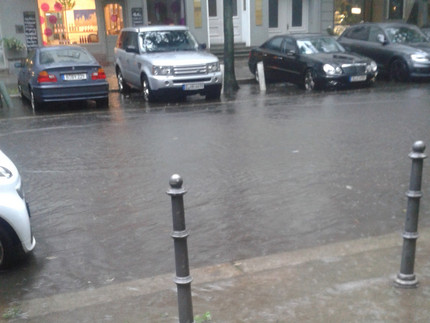 In the summers of 2017 and 2019, the city of Berlin was hit by heavy rainfall leading to urban flooding in several places due to limited capacities of the sewer systems. In both years, also other places in the vicinity of Berlin were affected, e.g. Leegebruch and Potsdam in 2017 and again Potsdam in 2019. This enables a comparison of how residents in different places were affected, how they coped with the impacts and how they adapt.

To investigate the question, how the city size might affects residents’ vulnerability, resilience and adaptation, the Task Force Group conducts an online-survey in affected regions of Berlin.

Two subgroups are involved in the Task Force:

The level of risk awareness, resilience (or vulnerability) and adaptation differs among residents from Berlin, Potsdam and Leegebruch. The direction of this pattern is unclear and needs to be explored by this study. While bigger cities have more resources to cope with an event (e.g. a professional fire brigade in Berlin) and do better with regard to risk communication and adaptation, residents in bigger cities might also be more vulnerable since they rely more on (different) public infrastructure and social networks among residents are not that well developed in comparison to smaller cities.