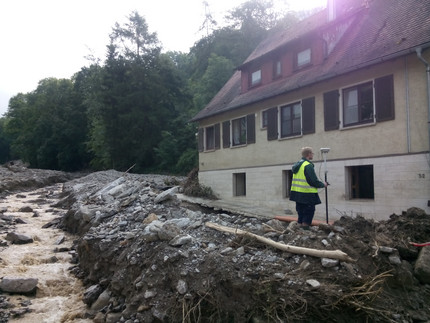 Foto: A. Agarwal
Measurements of damage in Braunsbach

According to climate experts, the summer of 2016 – from a global perspective – was the hottest summer since weather began being systematically recorded in 1781. Germany and Central Europe, however, were only slightly warmer than weather observations between 1961 and 1990. The average rainfall was also normal. A notable exception were those days in May when heavy rains caused severe damage in many communities in Bavaria and Baden-Württemberg. The most intensive thunder cell responsible for the torrential rain raged in the catchment area of the stream Orlacher Bach in and around Braunsbach (Baden-Württemberg). On May 29, 100-140 mm/m2 fell within only two hour, resulting in a strong flash flood that hit with full force. A task force of the Research Training Group “Natural Hazards and Risks in a Changing World” ("NatRiskChance") at the University of Potsdam investigated the event.

The main road was swept away

“There was a lot of debris along the stream; large excavators and trucks were driving back and forth. Everything was smeared with a layer of clay,” remembers Berry Boessenkool, who was among the first group of the task force “Flash Floods” to visit the area on June 3 and 4. Their task was to get an impression and estimate how much water (runoff) had gushed through Braunsbach. A difficult mission. How would the people, many of whom had just lost their possessions, react to scientists wearing University of Potsdam T-shirts? The flood forecasting center of Baden-Württemberg and the mayor had approved of the researchers presence, but would the inhabitants also accept them? “We met people who were still in shock but had already vigorously cleaned up the area,” Boessenkool describes the situation at that time. “The moment called for a can-do approach.” For the young researchers, as well. Their workdays were far from routine. They had to improvise, deal with the unexpected. “The main road had been swept away, so the detours alone took us a long time,” says Boessenkool.

He and the whole team were facing a challenging situation. Five days after the worst of it, their focus was reconstructing what had happened and to analyzing it theoretically, mathematically, and practically. Experts call this forensic hydrology. The calculations showed a maximum water flow of about 120 m3/s (+ /- 50 m3/s) at the outlet – an extremely high value. “The value exceeds the magnitude for a ‘normal’ flood by a factor of 500,” says Boessenkool. The enormous volume was established by means of various, sometimes admittedly inaccurate data: the water level visible at the houses and reported by the people, the line of floating debris, i.e. the geometry of the flow cross-section, and assumptions regarding the average flow velocity. The speed of the water proved to be an uncertain factor, so the young researchers used video recordings. As there had been no recordings of the event itself, they looked at footage from other parts of the area – and finally made an estimate. By counting video frames, they measured how much time objects floating in the water required to travel a certain distance, for example along a house. “ The speed could not be transferred 1:1 to the wider valley section, but we were able to determine a range of 70-170 m3/s,” says Boessenkool. In a field survey four days after the flash flood, they carried out comparative measurements. The result: a flow rate of 0.18 m3/s. A completely different number, about three orders of magnate below the estimated maximum flow rate! The overall calculation, however, made clear that the value range determined for the event itself was quite plausible. The researchers came to a flow rate of 107 m3/s - proceeding from a maximum of a 30-minute rain intensity of 40 mm and a runoff coefficient of 80%.

The disaster had a complex history

An unusual amount of precipitation led to this natural disaster. This started mainly from the macro weather situation "low-pressure area over Central Europe”, which had caused similar heavy floods in the past. The Braunsbach flash flood in particular was also caused by the high-pressure system “Sören” over Scandinavia blocking the low and by the fact that the air mass came to Central Europe from the south and southeast rather than the west. The surface low system “Elvira” then triggered the thunder cells in Baden-Württemberg and Bavaria, which formed into a squall line. Analyses of the Department of Hydrology and Climatology at the University of Potsdam based on rain radar data from the German Metrological Service showed that between 6:45pm and 8:00pm, approximately 100-140 mm of rain per square meter fell during that peak time. This occurs, on average, less than once in a century.

Also unusual were the soil erosion, the landslides in the area, and the sediment movements in the stream path due to the resulting discharge. “Boulders one meter in diameter rushed through the village," says Prof. Axel Bronstert, who heads the Research Training Group. “Such stones move move only once every 1000 years in average.” His doctoral students carefully examined section after section of the valley. In the first section alone, they mapped 30 large landslides. The earth movements led to the accumulation of loose sediment, which took the path downwards – as large quantities of trees and plant material, pebbles, and rocks did later. The documentation shows that the landslides brought more than 8000 m3 of material into the waters. The Orlacher Bach, normally 2 m wide and 20 cm deep, had become a torrent. Instead of just 1 m2, it suddenly had a cross-section of it to 54 m2. The young researchers also documented the damages it left behind in the village itself. For this, they used the open-source software “KoBoToolbox”, which was specifically developed for recording data in emergency situations and crisis areas. They also used IR cameras to document both the respective peak water level and the destruction on the building structure. The outcome was sobering: extremely extensive damage. The center of Braunsbach has been especially affected, and its reconstruction is likely to take a long time.

The disaster was caused by a cascade of various factors, the researchers stress. “Such extreme events have a complex history,” emphasizes Bronstert. In addition to the water level, the high flow rate and the large amount of bedload material played a decisive role in causing the damage. “It was not only the heavy rainfall that led to the massive destruction but also the combination of other unfavorable conditions – like the existing relief and the soil conditions,” he adds. It is impossible to responsibly judge to what extent humans are at fault. “If such water masses fall, human beings play a comparatively small role,” says Bronstert. That the very narrow stream in the village is culverted, i.e. covered with a few hundred meters of slabs did worsen the flooding situation in the center but not fundamentally.

The geoecologist is similarly realistic when it comes to the effects of land use. Some media wrote that the catchment’s corn fields were also responsible for the flooding and its repercussions. “Intense rainfall on corn cultures that are in their early stage of development led to silting up (clogging) of coarse and fine pores of the surface,” explains Bronstert. “This significantly reduces the infiltration capacity of the soil surface; this results in increased surface runoff. “Earlier investigations by his research group have shown that silted soil can have a noticeable effect on local flood formation during extremely intensive precipitation. The results refer, however, to frequent to medium-frequent heavy rain. “We know that the retention capacity of soil is a clear function of the rainfall,” says Bronstert. “This retention can play an important role in comparatively low intensity rainfall but is almost irrelevant for very intense rainfall.” In his opinion, landscape is being overestimated in extreme events like this. “Perhaps 20% less water would have drained less, but even this would have been enough for such extensive destruction.”

Axel Bronstert assumes that such an extremely rare natural phenomenon could have happened in the region before, indicated by alluvial fans the researchers found at the lower stretch of the stream. They indicate unusual flood and sediment transport events over several thousands of years.

More precise warnings about location, time, and strength of such events should be possible

Bronstert demands improved forecasts for extreme local precipitation and ensuing flash flooding and to do what the US and Australia do. It is necessary to record and predict the possible developments of thunder cells in time scales of hours to enable more accurate warnings about the location, time, and strength of such events. Short-term forecasts of this kind are, however, likely to also be difficult in the future, because the thunderstorm system is a partly stochastic one with many random components. The error rate of precise predictions for small areas, therefore, is high. “And that's a problem. After several false warnings, no one will listen anymore,” worries the NatRiskChange spokesperson. When the Braunsbach people have recovered, he and his students want to visit the village again: to present their research report at a town hall meeting and to inform themselves about the current situation.

Foto: A. Agarwal
Measurements of damage in Braunsbach