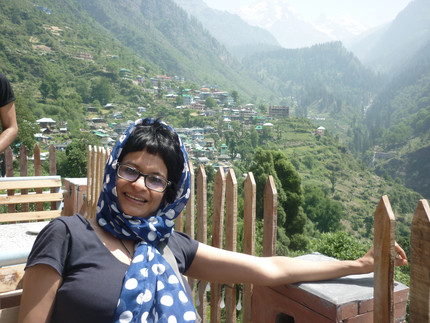 Ira Raja is Professor in the Department of English at Delhi University, India. She teaches South Asian literatures in English, as well as cultural studies and critical theory. Her research focusses on feminism and gender studies, ageing and intergenerational relationships, as well as consumption and food studies. She will hold the Potsdam Postcolonial Chair for Global Modernities in the 2022 summer semester.

Where will you be spending the next semester if you cannot come to Potsdam?

I would have been teaching at the University of Delhi, had I not come to Potsdam! And taking care of the several stray cats and dogs that adopted my family over the last two years. Delhi’s generally fierce summer promises to be even hotter this year but the easing of covid related travel restrictions meant that I could plot my escape to the balmy Berlin spring!  What I will miss out on though, being away, is not just my family and our various furry friends, but also that glorious gift of the North Indian summer – mangoes! A once-a-year trip to the mango orchards of Rataul, a little village tucked away in the Delhi’s neighbouring state of UP, known for its delicious but small and therefore commercially unviable variety of mangoes, was stalled by the pandemic. Plans to renew that tryst this summer now will need to wait until the next season!

What are you looking forward to the most with regards to your semester at the University of Potsdam?

My university in Delhi had reopened in February, for off-line teaching, after almost two years. I caught the last six weeks of the semester, teaching in the actual classroom, and I look forward to more of the energy of being in that space with new students, here in Potsdam.

I am also very excited to be teaching a series of new courses that bring together my long-standing research interests for the first time for an MA group. My course on literature and ageing, for instance, draws on a politicised reading of age as useful in thinking through a range of issues of contemporary relevance, not least the resurgence of Hindu nationalism in India in recent years. In my introductory course on cosmopolitan theory I look forward to engaging with students on what it might mean to be cosmopolitan in a world increasingly driven by the desire for new walls. My third and last course on the family as a site for exploring the complex history of Indian modernity brings together a set of readings drawn from over hundred years of Indian writing in English and in translation from other Indian languages.

What does our MA programme name ‘Anglophone Modernities in Literature and Culture’ mean to you?

I prefer Anglophone to ‘alternative’ which refers us back to the idea of an Original to which, then, this is meant to be an alternative. It is also preferable to ‘multiple’, which is problematic for implying that the varied articulations of modernity are self-contained and disconnected from each other. Anglophone is at once grounded and inclusive, without being judgemental. It serves to historicize the phenomenon of modernity without trying to locate it in terms of a hierarchy of original and secondary, cause and effect, center and periphery. The naming of the program enables me to veer beyond the literary text written in the English language to texts written in other Indian languages that nonetheless draw on an Anglophone cultural subtext. It also permits me to ground my readings of the literary text in a range of disciplines including anthropology, sociology, economics, philosophy, history, visual cultures, and more, to piece together an account of modernity in India, paying close attention to questions of subjectivity, citizenship, secularism, mass media, consumption, agency and care.