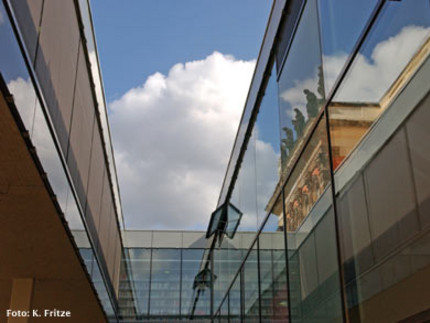 The Institute for English and American Studies at the University of Potsdam is distinguished by award-winning teaching, cutting-edge research and exciting international cooperations. Become a member of our diverse student body and join a group characterized by creativity and initiative. Student, alumni, and staff-led projects that have emerged from our institute include the English Drama Group, the Postcolonial Potsdam walking tour and app, the Talking American Studies podcast, the poco.lit. platform, the Didaktikwerkstatt Englisch, the minor cosmopolitanisms research training group, the Potsdam Postcolonial Chair for Global Modernities, and the interdisciplinary DAAD project for internationalizing teacher education. We also host Hard Times magazine. Graduates from the Institute for English and American Studies find careers in a variety of fields, including education, media, communication, translation, tourism, and various cultural and research institutions.

Our department offers an integrated BA/MA programme for students who plan to be teachers of English at German primary and secondary schools. For those who do not wish to go into school teaching, we offer a comprehensive BA in English and American Studies (as part of a two-subject Bachelor). At the Bachelor level language practice courses take place at the University’s Center for Languages and Key Competences (Zessko), which also offers students assistance with independent study. Finally, there are two prestigious specialised MA programmes: An interdisciplinary MA in Linguistics ("Linguistik im Kontext: Erwerb - Kommunikation - Mehrsprachigkeit"), as well as the highly international and diverse MA Anglophone Modernities in Literature and Culture.

The institute is one of the largest of its kind in Germany, and thus able to offer a very wide range of teaching and choices of research specialisation. It comprises approximately 2.500 students and 50 staff, and the institute is divided into three main sections: English Linguistics, English Language Education, and Anglophone Literary and Cultural Studies.

We are located in one of the most scenic university campuses in the world, situated at the western end of Park Sanssouci, in and around the 18th century buildings of the New Palais complex. It is only a short walk from Park Sanssouci train station, offering a fast and direct connection (free if you are a student) to Berlin (20 mins to Zoo station, 40 mins to Alexanderplatz).

These are the disciplines our department covers in research and teaching:

Linguistics is the scientific study of language. We study meaning, sound, syntax (grammar), discourse, language change and variation as well as language acquisition to understand how meaning is created, how people shape the world through language, and how the world shapes language. Research in English Language and Linguistics in our department investigates English language including structural, interactional and linguacultural phenomena. We recognize the complexity of language and value the research pluralism stemming from different research traditions and methodological frameworks. Through our courses, we aim at providing students with advanced knowledge of and research competences in English linguistics, in particular in the following specialisations: Sociolinguistics and Language Variation and Interactional Linguistics, represented by the chairs “Development and Variation of the English Language” and “Present-Day English Language and Linguistics”. We are committed to equipping students with the necessary competences to 1) develop and implement questions, concepts and methods for researching language, and 2) apply linguistics to solve real-life problems and pursue careers in education, management, editing, advertising, technical writing and more.

In our department, the teaching and research of Anglophone literatures – whether British, US-American or postcolonial – covers a wide chronological and topical range from the early modern period to the present, from major canonical works to popular culture. We address literature as a cultural institution that has specific functions and capacities to negotiate and consolidate but also question and destabilise social meaning. A leitmotif in literary and cultural studies throughout our department is our decolonial/postcolonial orientation. With this focus we aim to attend to the fact that both imperial expansion and counter-imperial resistance in multiple forms have been constitutive of literatures in the Anglophone world from the early modern period to the post- and neo-colonial present, in the (former) imperial centres as well as in the post/colonies worldwide. Accordingly, we read and discuss Anglophone literary texts and theories from around the world.

Cultural Studies is an interdisciplinary field that analyses the production of socially relevant meanings across various forms of cultural representations, including literature, film, music, performance, exhibitions, video games or social media. In our research and teaching we analyse these representations with the aim of developing a better understanding of the political, social and economic interests of individual actors or groups that are inscribed in these cultural texts. We are particularly interested in how these representations establish, justify, sustain or destabilise ideologies of gender, race, class, age, ability and other categories of difference. In keeping with the decolonial/postcolonial orientation of literary and cultural studies in our department, we draw on a range of Anglophone cultural studies traditions and apply these in our analysis of concrete cultural productions – contemporary, as well as historical – from Anglophone societies around the world. Building on these traditions, our work increasingly also addresses material-semiotic phenomena that emerge from nature-culture assemblages.

Acquiring a native language comes naturally – learning a language at school is quite a different matter. At the department of English Language Education, finding and providing answers to support language learning processes at school is at the core of what we do: we educate future primary and secondary English teachers to become competent reflective classroom practitioners. In the field of English Language Education, we are concerned with all issues related to English language learning, teaching, and assessment and the impact these have on English language teaching pedagogy in the classroom. The three chairs at our department offer a wide range of up-to-date courses on theories and concepts about learning and teaching anglophone languages, literatures, and cultures. Throughout the BA and MA of Education study programmes, students are given ample opportunities for classroom observation and teaching practice, supporting them in their journey of putting theory into practice and developing their English teacher identity and professional competence. Research interests at our department cover the width and breadth of issues in English Language Education, e.g. teaching literature, inter- and transcultural learning, education for sustainable development, early Foreign Language Acquisition, communicative interaction in the primary English language classroom, media-supported and data-driven language learning, evidence-based research.