This symposium is situated in the context of contemporary critical discussions on the nation-state. It focuses on the historical and contemporary relationship between sovereignty, territoriality, and jurisdiction with regard to the United States, with a particular emphasis on colonial/imperial processes of deterritorialization and reterritorialization.

Contemporary scholarly debates on these processes underscore that the relationship between various phases of American colonial/imperial expansion has not yet been researched adequately. This includes not only specific territorial mechanisms of domination and resistance, but also the way in which they have been fashioned into historical narrative—suggesting, for example, a bygone ‘past’ of Native struggle and a ‘present’ of globalization. The symposium focuses on the three main historical phases in question: colonization and US continental expansion (including the ongoing Native American challenge to U.S. sovereignty from “within” its perceived borders); the era of US imperialism beginning in the late nineteenth century and characterized by “overseas island possessions” such as Hawaii, Puerto Rico, and Guam; and contemporary globalization and neo-imperialism, including spaces such as the detention center at Guantánamo Bay.

Territoriality is a key term through which to explore the connections and/or differences between these eras, including the study of legal conceptions such as “incorporated” and “unincorporated territory” and cultural conceptions such as frontier theory, border theory, and archipelagic theory. Special attention will be given to the shift from continental expansion to “insular possessions” and the concomitant development of conceptions of the frontier, the island, and the ocean (including the notion of water as US territory/water as relational Native Pacific or Caribbean space), and the way in which this shift has been conceptualized both by US hegemonic legislation and by resistant colonized populations.

The production of Indigenous lands as US settler state territory is synchronic with the depoliticization of Indigenous peoples as population groups to be managed by US settler state authority: each relies on the other and reinforces the other in a process of simultaneity that makes both appear to be the natural effect of the other and gives none the appearance of settler colonial rule in violation of Indigenous peoples’ rights as independent polities. Such processes of dispossession and regularization fundamental to settler governance are, among other things, predicated on translating land into property, both as an alienable object in all-pervasive capitalist relations, and, in the form of nation-state territory, as property of the settler state that is to manifest the state’s unquestioned legitimacy and reach of power. As territorial property, furthermore, land is being “made to live” through practices such as large-scale cultivation, extraction, erection of infrastructure, and preservation of a “pristine” nature and wilderness in ways that embody settler state interests and settler modes of life. While this might appear commonsensical as features of the modern nation-state, I want to point out that this can only appear so in settler colonial contexts through the active and habitual erasure and disregard of other epistemologies of land, life, and politics, such as conceptualizing land as relation central to the principles of Indigenous socio-political formations which includes all forms of life and (including) the land in a place-based politics of relationality. Reading contemporary Native writing by authors such as Linda Hogan, Deborah Miranda, and Alison Hedge-Coke as sites of political knowledge production—articulated outside of the registers that conventionally get to count as political in settler nation-states—I want to show how their writing not only formulates such epistemologies and politics, specifically by emphasizing the indivisible and intimate relation between Indigenous people’s lands, bodies, and lives, but also how their writing functions as a strategy to unsettle US settler conceptualizations of land as nation-state territory. Doing so, these authors contribute to recent efforts in Indigenous studies and activism of disrupting the geopolitical and biopolitical logics of settler colonialism through an emphasis on the political normativities and lived principles of nonhierarchical relationality.

"American Territorialities and the Archipelagic Frame"

In counterpoint to long-running perceptions of the United States and the Americas as continental spaces, this presentation describes a centuries-long and spatially splayed space that Michelle Stephens and I have described as the archipelagic Americas, comprised of islands, island chains, and island-continent relations. The project of archipelagic American Studies emerges as a study of the archipelagic Americas’ interlinked cultures, a project dedicated to tracing the interrelations and overlaps of a broadly construed America and the larger archipelago of islands that spans the planet. The presentation further traces key features of a postcontinental and archipelagic American imaginary, outlining reading practices that hold in tension the planetary and the microregional. Intervening in Americanists’ field-wide discussions of American territories and territorialities, the forthcoming essay collection Archipelagic American Studies: Decontinentalizing the Study of American Culture functions as an archipelago of islands, an assemblage aiming to crystallize emergent trends in Americanist scholarship, namely, a turn toward approaching islands, island-sea assemblages, and coastline formations that goes beyond colonialist tropes and requires a new world of archipelagic understanding.

The U.S. nation-state in the contemporary moment engages in processes of deterritorialization and reterritorialization through legal fictions of immigration law. These legal fictions help constitute the territory from which bodies are excluded and deported. Space is constituted through legal language, and then serves as the seemingly natural “ground” for that language. At the most basic level, is a person inside particular territorial borders, or is the person standing outside at the gates? This might seem a relatively simple inquiry: is the person already here, or is the person at a port of entry, seeking to come in? But a little probing shows the legal doctrines governing this question to be complicated and paradoxical, as demonstrated by a number of contexts in which the recognition of bodies as inside or outside a nation’s territory has proved deeply consequential. I will discuss prisoners held in detention at Guantánamo Bay, as well as current litigation brought by asylum seekers from Central America who are fighting their removal from the United States, against government claims that they possess no due process rights as “arriving aliens seeking admission,” rather than as “deportable aliens who have entered the United States.” Yet I will also argue that an understanding of a territory’s spatial dimension is unduly limited when its focus remains formal law, and when it presumes the nation-state to be a natural, innocent, and abstract space. Legal imaginings of immigration and space, and of U.S. territory more generally, are shaped by systems of domination. When we examine how space is socially produced, and how spaces constitute bodies, we see the key role played by relations of power. I will illustrate this through a particular case example focused upon the rhetorical extraterritorialization imposed upon African Americans seeking poor relief. I conclude with thoughts on cosmopolitanism’s yearning for an ethical place-lessness, and describe how noncitizens themselves are challenging legal imaginings of space.

"Kingdom Unincorporated: Hawaiian Indigeneity, Statehood, and the Politics of Sovereignty and Territoriality"

The first part of my title, “Kingdom Unincorporated” aims to speak to Hawaii’s hybrid legacy. As a monarchy illegally overthrown in 1893 by a group of 13 white men backed by the US military, while occupied, the Kingdom was subsequently subject to the governance of a new state entity – the Republic of Hawaii, founded in 1894 – followed by purported annexation by the US government in 1898. Next, Hawaii was organized by the US administration as a colony and treated as an unincorporated territory from 1900-1959. As such the US government had Hawaiʻi added to the United Nations list of non-self-governing territories in 1946, but later removed the islands from that designation after an internal vote was conducted to pre-determine admission into the “union” as the “50th state.”  And throughout all of these regime changes, there is the endurance of Kanaka Maoli indigeneity despite contested statehood (US state versus the independent state of Hawaii, the Kingdom) – a fraught legal and political landscape of persistent questions of sovereignty and territoriality.

As this symposium “is situated in the context of contemporary critical discussions on the nation-state,” and “focuses on the historical and contemporary relationship between sovereignty, territoriality, and jurisdiction with regard to the United States”, my presentation tackles the relationship between these competing forms of governing mechanisms in the Hawaiian context in relation to the various phases of American colonial/imperial expansion. Looking at Hawaiʻi in the context of contemporary critical discussions on the nation-state, transnationalism, and globalization, is a fruitful endeavor, and arguably bound to the United States.  This tension in the Hawaiian sovereignty movement is an effect of US nationhood and ongoing assertions of American territoriality, and the enduring Hawaiian challenge to U.S. sovereignty from “within” its perceived borders. Looking at Hawaiʻi as a case study, my work challenges the territorial, political, legal, and imaginative claims of U.S.-American nationhood

Brandy Nālani McDougall and Craig Santos Perez (both U of Hawai'i)

The symposium will take place on July 7th, 2016 at the University of Potsdam, Campus Neues Palais, Building 8, Room 0.60.

For more information, check the campus map below.

Please note: The RE1 to >Magdeburg Bhf< does not stop at >Potsdam Bhf Park Sanssouci<.

In addition to the RE1, both the trains RB20 (to >Oranienburg Bhf<) and RB21 (to either >Golm Bhf< or >Wustermark Bhf<) stop at >Potsdam Bhf Park Sanssouci<.

There are multiple bus lines coming in from Potsdam that have a stop on Campus Neues Palais. The bus station closest to the symposium venue is called >Neues Palais<.

You can take either the bus 605 or bus 606 from Potsdam, Schloss Charlottenhof (direction/final stop: Potsdam, Wissenschaftspark Golm) to Potsdam, Neues Palais (estimated time of arrival: 6 minutes).

Please consult the google maps below for details. 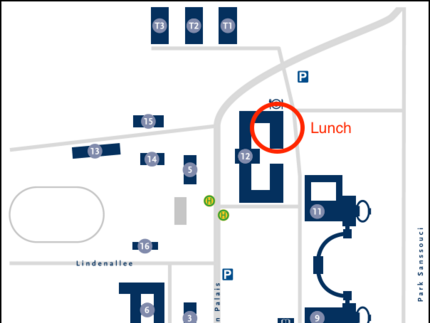 There is no registration, but please contact us by June 27th 2016 in case you are planning on participating, or if you need more information.

There is not going to be an official conference dinner, but we will re-convene at the "Pane e Vino" in Potsdam after the symposium. If you want to take part in the dinner, please also let us know by June 27th 2016.

Postcolonial Potsdam is a group, which deals with parts of the colonial history of Prussia and, primarily, the postcolonial silence in contemporary Potsdam.

In the immediate vicinity of the university campus “Am Neuen Palais” in Potsdam, a group of sculptures, some paintings exhibited in Sanssouci as well as botanic imports in the Potsdam landscape of palaces and gardens show a multitude of references to Prussia’s colonial history. These – as well as numerous traditions and practices – are mostly willfully or unconsciously ignored by the majority society because this version of the past does not fit into conceptions of Prussian heritage and responsibilities vis-a-vis the colonial past and a reconsideration of it are repressed.

We try to contextualize the past and make invisible parts of history visible. We write a blog, offer postcolonial tours through Potsdam and organize events and workshops.

This should serve to open up discussions of how to deal responsibly with the legacies of traumatic histories of colonial injustices.

Postcolonial Potsdam is affiliated with Weltweiterdenken e.V.; its members are lecturers and students of the University of Potsdam and other enthusiasts.