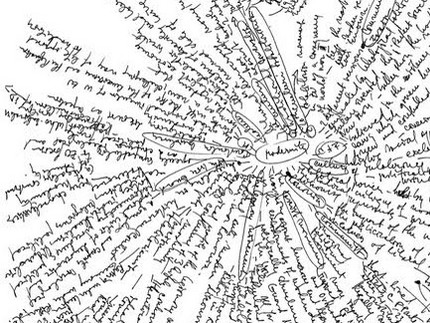 "As a part of the project, “Writing the Cosmopolitan Imagination” (June 2019), I chose to work on the ways in which the Holocaust has been represented in the public spaces of Berlin. The project took me to a number of sites in and around the city, such as Sachsenhausen concentration camp, Wannsee Museum, Topography of Terror, among others. The memory work in these sites had been undertaken by a number of agents – the state and its institutions, citizens’ groups and individuals, descendants of the victims as well as the perpetrators. The different memorial projects and the distinct ways in which they represent/re-present the events of the Holocaust raised and helped me engage with a number of issues: the city as a palimpsest with the present and past(s) jostling for space, the wide variety of reasons that drive memory work, the ways in which “working through the past” can actually help one rethink the present, and the ethics of “consumption” i.e. the ethical questions emerging from viewers’ relationship to the objects of representation. One of the micro-memorials that I found particularly interesting was the “Stumbling Stones” which encourages active participation of ordinary individuals, gives them a sense of agency in making and re-making of history as well as a sense of responsibility to their collective past."

"As part of my association with the Department of English, University of Delhi, my colleagues and I were invited to a research excursion by the University of Potsdam in June 2019. The project demanded that we spend time exploring Berlin, and in the spirit of multiple cosmopolitanisms visible in New Delhi and Berlin, present our observations at the end of our stay. My observations stemmed from two visits to the Sachsenhausen Memorial. I was struck by the exhibition of contemporary artwork by camp inmates and chose to write about one sketch by Vladimir Matejka, which for the sake of convenience I titled “Ordnung”. Over the course of my research I found academic and scholarly writing on “concentration camp art” and the meanings and compromises inherent in the display of such art. By the end, I presented a working paper titled “Caricatures from Concentration Camps: Exploring Visual Spaces in Sachsenhausen Illustrations”. I discussed Matejka’s sketch in terms of fantasy and caricature. I have written on fantasy and caricature in the past but discussing art in traumatic contexts through fantasy and caricature was a first. I realized that pleasure and leisure- two principles that animate fantasy and caricature in conventional scenarios- cannot be imposed on concentration camp art. Artists in camps produced work under great duress and were made to negotiate keenly with their captors. Art of this kind is foremost a visual documentation of trauma. My intervention was to suggest that, like all documentation, it was stylized. It was presented or illustrated, with a sense of aesthetics that used fantasy and caricature. Fantasy and caricature then, are important points of entry to remind us of a method of visual negotiation that the artists in the camp practiced. One of the rubrics that our project was attached to was “space”. My presentation discussed a “space” that artists used within the painful “space” of the camp."

"In my Summer School Project I have specifically focused on the institutionalised aspect of Cultural memory. I looked at the works of Jan and Aleida Assmann who elaborated on the term “cultural memory”, and with the help of their works I tried to analyse how the process of constructing one’s cultural identity and memory takes place within the society. Institutions such as libraries, museums, monuments, archives and other mnemonic institutions are articulating a message from the past and targeting to the certain group of people. This is how museums function as they store, collect, conserve the past evidences. But is the message that institutions are carrying equally received by the targeted audience? Michel Foucault has associated museums as a space of heterotopia “in which time never stops building up and topping its own summit [...] the idea of accumulating everything, of establishing a sort of general archive, the will to enclose  in one place all times, all epochs, all forms, all tastes, the idea of constituting a place of all times that is itself outside of time and inaccessible to its ravages, the project of organizing in this way a sort of perpetual and indefinite accumulation of time in an immobile place, this whole idea belongs to our modernity”. My focus was on the three major points: first Cultural Memory as a concept, second the role time plays in its formation or reformation and third, the study of the Berlin Museums as repositories of cultural memory."

There is no  Berlin novel written on the subject of man and environment, therefore I made some of the city's green and eco-friendly sites my areas of research.

Prinzessingarten: The Prinzessingarten is located in Kreuzberg 36 . Here plants and crops  are cultivated, locally and ecologically. The garden as a whole is mobile. Bar, kitchen, workshop and storage rooms are located in disused and converted overseas containers, planted in raised piles of stack containers and in rice sacks. Independent of the ground soil, this method of cultivation and the use of food-safe materials allow for an ecological cultivation in the city, where most of the available land is either sealed or contaminated. In addition to that , a mobile garden opens the possibility for a temporary use.

The area at Moritzplatz rents the Prinzessinnengarten from the city administration. The rent and all other costs are borne by the garden itself. Revenues are generated by garden catering and the sale of vegetables, from funds that the garden acquires for the realization of various educational projects, from the construction of other gardens, consulting services, fees for pictures, lectures and guided tours and donations in the form of gardenbed sponsorships.  Many people volunteer here to make such a place possible. As a framework for the various social, educational and economic activities, the founders of the garden  have established a non-profit company  called Nomadisch Grün, whose main concern is to make the garden a place of learning. It's all about forms of informal learning. Knowledge is acquired through practical experience and the exchange of knowledge .

During my stay in Berlin I ended up  visiting Kreuzberg on different occasions and it always came across as a multicultural space : a place where people from different ethnicities co-exist . Also for me personally the Prinzessingarten was a place which was very organic in its approach. One could sit there for hours . I saw people coming there and devoting time to their art , writing a journal, and creating music sitting under a tree . It is also a place for alternative learning , where an exchange of oral and practical knowledge takes place. It is also a perfect example of harmony between humans and nature in an urban space . Berliners come there and grow their plants  and take care of the plants , they have a connection with they are doing.  It is a successful attempt to bring nature back to the city.

Urban Beekeeping: Apart from urban gardening , urban beekeeping is another initiative adopted by the city dwellers in Berlin. Urban beekeeping has been practiced in metropolitan cities like New York and Paris, too. Berlin has been a thriving landscape for bees. There are about 4 lakh tress in Berlin , which makes 1\5 of the city area covered with forest. Since a few years Berliners have been working towards increasing the number of bee colonies and towards increasing the percentage of native honey produced through urban bee keeping . Bees are the third most important live stock after cattle and pork. In the past decade 30 % of the German bee population has disappeared, the causes being  pollution by pesticides, diseases in the bee population and the aging of the beekeeper.  The 3000 Berliners who have been  practicing  bee keeping as a hobby are guided by 500 professional beekeepers .

The founder of the berlin beekeeping community “Berliner Honig “ Annette Mueller has her shop in Berlin, where pallets full of glasses on which not only the name of the flower, but above all the name of the beekeeper is noted . This also creates a connection with what one produces. The honey from urban beekeeping is not  organic honey with a certificate, but its natural, comes from fair trade and its greatest advantage is its regionality. Berliners have bee hives set up in their balconies and their terraces. Many students in the Freie University Berlin have become amateur urban beekeepers and enjoy this as a hobby and like contributing towards producing berlin honey .

Tempelhofer Feld : Berlins Tempelhofer Feld was one of the first airports in Berlin . Originally the  Tempelhofer Feld was a parade ground for military drills  and on holidays Berliner would visit the site for recreation and leisure.  In 1920 an airport was built on the site . Later in the year 2008  a referendum  was conducted , where the Berliners decided in favour of the closing down of the airport . The park which we now see was made accessible for public use in the year 2010. The city dwellers of Berlin reclaimed the 386 hectares of open space and  one of the world’s largest buildings, which is about  1.2 km wide, for public use.  Today the decommissioned airport has been converted into a park and has a 6 kilometers cycling area .

Another unique aspect of the park is , that it has become a habitat for open country birds, considering that it is huge, flat and gradually returning to nature. The old runways and service roads are still there but the areas between them are not mowed very often . Some of the areas have been allowed to go completely wild and nature finds its way back, whenever human turns his back. Now the Tempelhofer Feld has become the largest public park in Berlin and a birdwatcher’s paradise . The Tempelhofer Feld can be perceived as a coming together of wild nature and something man made. The transformation of a decommissioned airport into a habitat and the man and natur harmony  is a unique aspect of the sight.