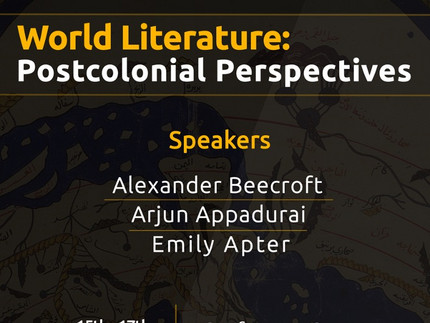 The idea of world literature has seen an unparalleled resurgence in the last two decades or so. Through large-scale research grants, publishing programmes, and curricula development it is threatening to become the new critical common sense across the humanities, and particularly in literature departments. However, both in the nineteenth-century idea of Weltliteratur (Goethe, Marx-Engels) and in its more recent revival as the new comparative literature, world literature has many and important genealogical entanglements with colonial/postcolonial histories, and only in recent years have we begun to explore these links critically. Unlike the paradigm of comparative literature, for instance, world literature relies on ‘a translatability assumption’. Not only is translation here thought to be a good thing in itself, the prime metaphor of translation as “border crossing” to signify the general equivalence and ready meaning exchange between languages also appears to presume that translation is an unproblematic exercise. Furthermore, as Emily Apter suggests, the view that translation is "a form of authorized plagiarism" signifying creative property that exceeds individual possession  renders the translational author a “natural complement to World Literature understood as an as an experiment in national sublation that signs itself as collective, terrestrial property”. This particular understanding of translation and all that it entails in terms of the diminishing significance of national borders, would seem to make world literature a natural replacement for the category of postcolonial literature.

Such triumphalist accounts of world literature have been rightly critiqued for their tendency to elide the politics of actual borders that divide the world, and for their lack of concern with the material conditions of translation and circulation of texts. The proposed conference strives to probe more deeply as to what we understand by “translation” and “unstranslatability”: Do we accept what is lost in translation as collateral damage incurred in the larger interest of cross-cultural understanding? Can we really be as sanguine about what is lost in translation, when it is clear that such losses are overwhelmingly incurred by already subordinate non-European modes of knowing, conceptualization and representation? How far do critical concepts of “decolonial cosmopolitanism” and “border thinking” go towards addressing the perils of translation? Has globalization really rendered the older paradigm of national literatures and the notion of the postcolonial obsolete? Should the latter now be subsumed under the umbrella term “world literature”? What is the price we pay for substituting the inescapably political category of postcolonial with a neutral, descriptive, even apolitical term such as world literature? And what is “the world” that the concept of world literature appears to imply? This conference aims to address some of these questions. Interested participants may send their proposals of no more than 400 words for 20min papers to Ira Raja at the contact email provided below, by 15 October 2017. Possible topics include, but are not limited to, the following:

•      Translation as a political act

•      The “Greenwich meridian” of world literature and its peripheries