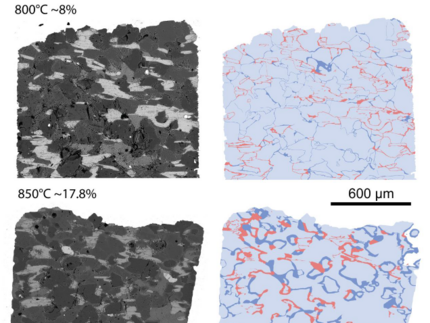 Julie Michaud (DOME researcher at the University of Hannover) published an article in Constributions to Mineralogy and Petrology . She and her co-authors decribe the behavior of different rare elements in peraluminous granites wih several experiments. Here you can find the abstract of the article.

Experiments were conducted to explore the behavior of Li, Rb, Nb, Sn, Cs, Ta, W during crustal melting and test the anatectic origin of rare metal-bearing peraluminous granites such as rare metal granites (RMGs). The experiments were performed under fluid-absent conditions at 800 and 850 °C, 400 MPa and moderately reducing fO2 (ΔFMQ = − 0.5 to − 0.8). Starting materials were cores of several millimetres drilled from two natural rocks, a biotite-rich paragneiss (Pg) and a muscoviterich orthogneiss (Og) enriched in Li, Be, Sn, Cs, W. Both protoliths produced small melt fractions from 8 to 20% vol. Melt distributions were either homogeneously distributed at grain boundaries in the Pg or preferentially associated with muscovite reaction zones in the Og. In the Pg at 800 °C, melting is mainly fluid present, driven by interstitial water at grain boundaries. At 850 °C, biotite dehydration-melting produces peritectic orthopyroxene, hercynitic spinel, ilmenite and alkali feldspar in addition to melt. In the Og, muscovite dehydration-melting generates melt plus peritectic biotite, hercynitic spinel, ilmenite, Al silicates and alkali feldspar. Experimental glasses are nearly homogeneous, silica rich, peraluminous and leucogranitic and their major element compositions differ only little between the two protoliths. In contrast, the trace element concentrations vary as a consequence of chemical and textural heterogeneities in our starting materials. Compared with source rocks, the Og glasses are enriched in Rb, Nb, Ta, W and depleted in Li, Cs and the Pg are enriched in Li, Rb, Cs, W and depleted in Nb, Ta. Mass-balance calculations indicate that during muscovite dehydration-melting, Li, Cs and Rb partition into the melt; whereas Nb, Ta and W are preferentially incorporated in peritectic phases. Li and Cs also partition toward the melt during biotite dehydration-melting. The partitioning behavior of trace elements during crustal melting is a function of the melting reaction and partition coefficients between melt, residual and peritectic phases. Experimental glasses are similar to peraluminous muscovite granites but fail to reproduce RMG compositions. Alternatives to mica dehydration-melting such as fluid-present and residual source melting emphasize the difficulties with an origin of RMGs by purely anatectic processes. Crystallization differentiation might have to be combined with mica dehydration-melting to explain the distinctive geochemical features of RMGs. 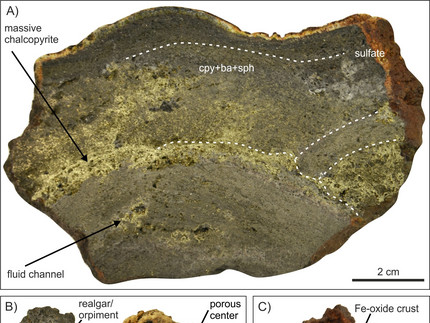 Jan Falkenberg (DOME researcher at the GeoZentrum Nordbayern) published an article about the "Effects of fluid boiling on Au and volatile element enrichment in submarine arc-related hydrothermal systems". Jan and his co-authors analyzed samples from the black-smoker chimneys and conclude from their bulk sulfide-sulfate, isotope and microanalytical data that volatile (e.g., As, Sb, Se, Te), and precious (Au) element enrichment in submarine arc-related hydrothermal systems can be decoupled from a magmatic volatile influx and is instead a result of boiling-induced trace element fractionation. Here the abstract of the paper:

Shallow (<1500 mbsl) submarine arc-related hydrothermal systems can host base (Cu), precious (Au) and volatile elements (As, Se, Sb, Te, Tl) in significant quantities. Their wide application in the high-tech industry, but a potential eco-toxicological footprint gives them a strategic importance. However, the processes that concentrate these elements in submarine arc-related hydrothermal systems, compared to their mid-ocean ridge counterparts are still debated, and it is unclear whether boilingrelated processes and/or the contribution of magmatic volatiles are key for their enrichment.

We present bulk sulfide-sulfate, isotope (S and Pb), and high-resolution microanalytical data of hydrothermal sulfides from the Niua South fore-arc volcano in north Tonga, where numerous black-smoker type sulfide-sulfate chimneys emit boiling fluids with temperatures (up to 325 _C) near the seawater boiling curve at ~1170 m water depth. Hence, this system represents an ideal natural laboratory to investigate the effect of fluid boiling on base, precious, and volatile element enrichment associated with hydrothermal seafloor mineralization. At Niua South, textural and chemical variations of multiple pyrite (framboidal, euhedral and massive), chalcopyrite (linings), and sphalerite (dendrites and linings) generations are indicative for sulfide precipitation from early low-temperature (~240 _C) fluids that underwent abundant mixing with ambient seawater (low Se/Tl and Co/Ni ratios in pyrite) and from later high-temperature (up to 325 _C) (high Se/Tl and Co/Ni ratios in pyrite). In addition, crustiform inclusion-rich pyrite that precipitated from high-temperature boiling fluids shows low Bi/Pb, Tl/Pb and Sb/Pb ratios due to volatile element loss (e.g., Tl and Sb) to the vapor phase compared to pyrite that formed during the low temperature stage. By contrast, late sphalerite (~280 _C) is enriched in elements with an affinity to Cl-complexes like Mn, Co, Ni, Ga, Cd, In, and Sn, and therefore precipitated from the corresponding Cl-rich liquid phase.

Gold occurs in solid-solution and as boiling-induced particles of native Au, electrum, and Au-rich Bi-tellurides in pyrite (up to 144 ppm Au), sphalerite (up to 60 ppm Au), and chalcopyrite (up to 37 ppm Au). These particles (<5–10 mm) probably formed during fluid boiling causing an extreme Au enrichment (>30 ppm) in the mature and late stage of chimney formation. Lead isotope data indicate that the hydrothermal fluids scavenged metals not only from the deeper basement in the reaction zone (20–40%), but also from young dacitic volcanic rocks near the seafloor in the upflow zone (60–80%). Sulfur isotope (d34S = _0.3 to 4.4‰) and Se/S*106 values (<1500) of hydrothermal sulfides provide no evidence for a magmatic volatile influx and indicate that S, and most metals and semi-metals were likely leached from the host rocks. Hence, volatile (As, Se, Sb, Te, Tl), and precious (Au) element enrichments in arc-related submarine hydrothermal systems can be decoupled from magmatic volatiles and are instead a result of boiling-induced trace element fractionation – a hydrothermal enrichment process, which has been underestimated to date. 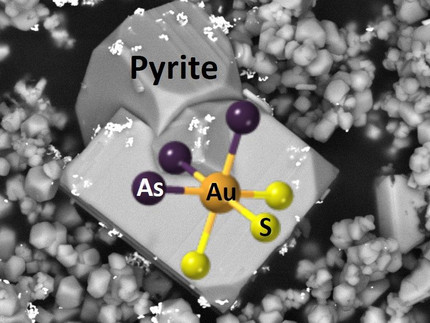 An international team of scientists with participation of Dr. Maria Kokh from one of the DOME projects was able to elucidate the mystery of ‘invisible’ gold enriched in sulfide minerals. Their results were recently published in the journal Geochemical Perspectives Letters.

To form an ore deposit, gold needs to be concentrated from a thousand up to a million times more than its average abundance in the Earth's crust (which is only about 1 mg per ton of rock). In nature, only very few minerals, namely the sulfides arsenian pyrite and arsenopyrite, are known to present such enrichment factors for gold. However, despite the enormous implications for ore deposits, the state of this ‘invisible' gold and the cause of its entrapment in these sulfides remain one of the greatest mysteries in the history of the study of ore deposits. An international interdisciplinary consortium of scientists has now shown the exact nature of this invisible gold incorporated by these minerals and revealed the fundamental mechanism that drives these ‘mineral pumps’ at the atomic-scale.

By combining high-resolution experiments – carried out at the European Synchrotron facility (ESRF) – and physical-chemical modeling, the team has discovered that gold enters these minerals with a formal oxidation state of +2. This is made possible by the occurrence of a redox reaction between the fluid and mineral that allows binding gold to arsenic, leading to the formation of the atomic cluster AuAsnS6-n in the mineral structure (Image). This universal gold-arsenic coupling mechanism explains how these iron sulfides can massively capture gold and release it later, controlling both concentration and distribution of gold in different types of hydrothermal deposits. This novel conceptual model opens perspectives for finding new sources of gold and other precious and critical metals hidden in iron sulfide minerals, and for improving the processing and recycling of metal ores for our ‘metal-hungry’ society.