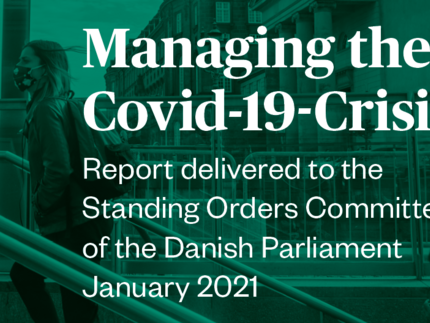 Potsdam Contribution to the Evaluation of the Danish COVID-19 Strategy

On January 29th, the independent evaluation report on the Danish COVID-19 strategy was presented to the Danish Parliament, with contributions from Jochen Franzke and Sabine Kuhlmann as well as other scientists from Denmark, Sweden and Norway.
Among other things, the report contains an analysis of the German COVID-19 management, which was contributed by Sabine Kuhlmann and Jochen Franzke.
In this study, the authors critically examine the administrative management of the pandemic in Germany, as well as questions of the distribution of responsibilities and intergovernmental coordination, policy advice, and the role of parliaments and courts during the crisis.

The report, which was adopted by parliament at the end of January, met with widespread media coverage in the Scandinavian region, particularly with regard to the expanded executive powers in pandemic management. Corresponding articles appeared in Dagens Nyheter,  Svenska Dagbladet, Dagens Medicin and others.

Find a summary of the report in English here.
You can download the article by Sabine Kuhlmann and Jochen Franzke here in English.