The research center coordinates research in Interactional Linguistics (IL) at the University of Potsdam and promotes collaborations and contact to like-minded researchers in Germany and abroad. The center hosts researchers, instructors, and students who pursue research projects focusing on the interdisciplinary study of language in interaction.. 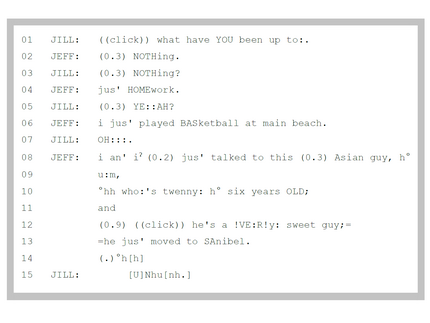 What IL does
IL is a recently established empirical research branch that links linguistics and Conversation Analysis. It considers communication as a holistic, semiotic event.

What we study
The analytic focus lies on describing and explicating the complex interplay of phenomena from all (sub)branches of linguistics that participants use to solve recurrent tasks in social interaction. IL describes the way interlocutors use phonetics, phonology, prosody, morphology, lexis, syntax, semantics, and pragmatics - and their respective relationship to other semiotic systems like gestures, facial expressions, and proxemics - to accomplish sequences of social interaction.

Apart from single-case analyses of phenomena in German and English, IL increasingly studies cross-linguistic, diachronic, and applied aspects. All research is based on audio and video recordings of authentic interaction. 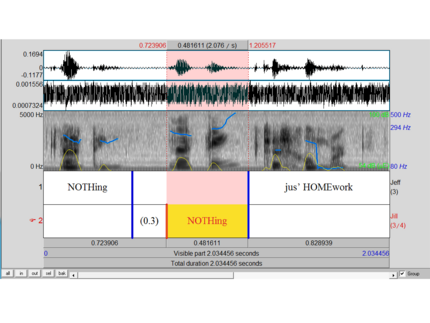 Image: Analysis of segments 02-04 of the excerpt in PRAAT

How we proceed
IL considers communication as a holistic, semiotic, temporal, and social event and studies it in its natural everyday and institutional contexts. It aims to reconstruct the social and communicative reality created by the participants and to study the practices and resources they use to solve recurrent tasks in interaction, such as turn taking, repair, sequence organization, topic organization, the accomplishment of actions and activities, and the contextualization of genres. In doing so, IL either investigates the resources used by the participants to accomplish a particular interactional task, or it studies which interactional tasks can be accomplished by a particular linguistic pattern (e.g., clauses and sentences, noun phrases, particles like jaja).

What we draw on
IL was established in the mid-1990s. It mainly draws upon assumptions and methods of ethnomethodology and Conversation Analysis. Thus, it uses detailed single-case analyses of the communicative behavior of the participants in its sequential context, including deviant cases, in order to inductively infer members' categories, resources, normative expectations, and orientations as a basis for creating and interpreting social interaction.

What our aim is
The IL approach to language in social interaction is intended to lead to new insights regarding linguistic categories and concepts as well as a general theory of language in interaction. Moreover, it aims to contribute to developing realistic grammar models, efficient systems for language processing and synthesis as well as improved language teaching material.

Image: Analysis of segments 02-04 of the excerpt in PRAAT