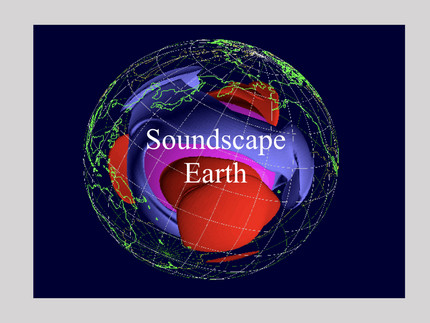 After the release of the CDInner Earth: a seismosonic symphony (which was not planned as a science project), Frank Scherbaum wanted to convey the fascination of seismology and music to a mixed and above all young audience by making the earth, which is a vibrating structure (and thus a musical instrument), acoustically and visually experienceable as a sound body.

Vibration and wave propagation phenomena in the earth, which represent the daily bread of seismologists, so to speak, refer to the production of sound in well-known musical instruments, of which almost everyone has an idea. This makes it easy to understand complicated phenomena such as oscillation resonances in sediments, the generation of volcanic tremor signals, the earth's natural oscillations after earthquakes, and the continuous natural oscillations (hum) excited in the atmosphere. As a by-product, basic concepts of musical acoustics such as timbre, sound spectrum, harmonic and percussive sound are clarified. For this purpose, the creation of sound in well-known musical instruments (guitar, flute, drum) was acoustically and visually illustrated with self-generated Mathematica simulations, which are integrated into the lecture as films.

After colleagues abroad became aware of the lecture, Frank Scherbaum received invitations to the renowned English Society for Earthquake and Civil Engineering Dynamics in London, England (see SECED Newsletter Vol. 16(4), May 2003), the University Joseph Fourier in Grenoble, France, and the University in Sao Paolo, Brazil.

The response has been enthusiastic in all cases, demonstrating that the topic is of interest to a broad target and age group.

The introduction of the Computable Document Format (CDF) finally motivated me to create the talk as an interactive document. In addition to the text, it contains a number of sound and film examples that can be read and heard with the free CDF Player®.

A static version as PDF file is also attached.