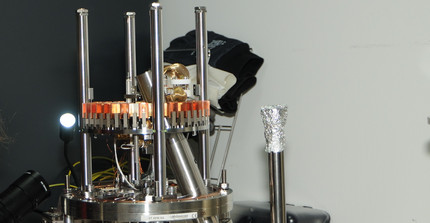 Potsdam physicists are working on various surfaces, such as semiconductors. Of particular interest to them is how one material covers the surface of another. If islands of lead on silicon surfaces are prepared in such a way that they are only a few atomic layers thick, then the electrons are trapped in them in a very small space. Their energy therefore no longer varies continuously as in thicker islands. They form quantum mechanical standing waves. The quantum mechanical energy states of the electrons in lead correspond to those in a one-dimensional "box". When the thickness of the layer is increased, energy oscillations occur. Until now, scientists have only been able to determine the exact layer thickness of the lead islands to an atomic level. It was therefore unclear whether high electron energy belongs to an even or uneven number of atomic layers. By measuring electrostatic forces on the surface of the lead islands using atomic force microscopy, researchers, including Prof. Dr. Regina Hoffmann-Vogel from the University of Potsdam, have now been able to show that the islands have an atomic layer thinner than previously suspected. These latest research results have now been published in the journal "Physical Review Letters".

University of Potsdam
Institute of Physics and Astronomy