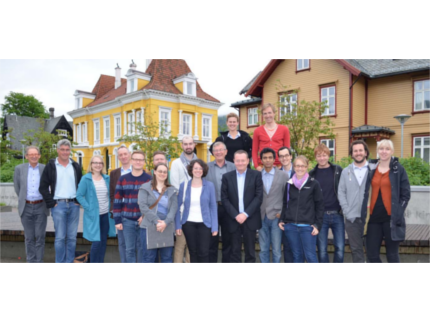 Organizations and coordination in times of wicked problems

From 21 to 23 Mai 2014 WIPCAD and the University of Bergen held a joint PhD-workshop in Norway.

How  do  organizations  jointly  tackle  complexity  when  facing  wicked  policy  problems  like climate change, cross‐border welfare and tax policies or internal security and safety? Under the  heading  of  coordination,  a  core  focus  and  somewhat  'magic  term'  of  public administration  and  organization  theory,  some  of  the  most  distinguished  European  public administration scholars discussed this question, the still fuzzy concepts and its application in current  organization  research  with  14  selected  PhD  students  in  an  intense  three‐day workshop.  The  workshop  was  organized  by  WIPCAD  member  Prof.  Werner  Jann  in conjunction with the local host and long‐time research collaborator Prof. Per Lægreid. Our fellows  Anne  Lange,  Kai  Harbrich,  Michaela  Böhme,  Ina  Radtke  and  Robert  Gäde  hereby presented parts of their dissertation projects, while WIPCAD post‐doc Thurid Hustedt served as a discussant.

Coordination  and  other  modes  of  establishing  coherence  within  and  among  organizations, are  ‘hot  topics’  in  public  administration  and  organization  theory.  Attempts  to  coordinate governmental  policy‐making  and  implementation  across  organizational  boundaries,  sectors and  levels  are  certainly  not  new.  However,  they  have  regained  attention  in  the  context  of new  'wicked  problems'  and  ever  stronger  multi‐level  governance  arrangements  in  recent years. Both research trends emphasize transboundary challenges that cut across traditional, historically evolved, responsibilities.

Starting the PhD workshop with Aaron Wildavsky (together with Pressman 1984, 133), ‘No phrase  expresses  as  frequent  a  complaint  about  the  federal  bureaucracy  as  does  ‚lack  of coordination‘.  No  suggestion  for  reform  is  more  common  than  ‚what  we  need  is  more coordination‘, Werner Jann condensed and discussed the classics of coordination literature. Subsequently,  Martin  Lodge  (LSE)  drew  lessons  from  planning  failures  and  disaster mitigation  for  coordination  research.  Consequently,  Christopher  Pollitt  (KU  Leuven)  gave  a more  empirical  sketch  about  the  development  towards  more  ‘horizontality’  in  European central governments as well as the reform trend of a so‐called ‘whole‐up‐government’. Like each of the well‐organized workshop days in Western Norway, the professorial input in the morning  was  followed  by  a  conference  panel  format  with  paper  presentations  by  PhD fellows.  The  whole  evening  program  including  the  dinner  at  the  harbor:  was  a  total coordination  success:  everybody  was  there,  a  clear  allocation  of  tasks  and  resources  were established and all participants shared a common goal.

Day 2 began with Morton Egeberg (Oslo), who accentuated the importance of coordination in the multi‐level setting of the European Union by analyzing the indirect implementation of EU  directives  at  the  domestic  level.  Moreover,  Per  Lægreid  spoke  about  the  challenge  of coordination  in  reaction  to  the  process  of  fragmentation  through  NPM  reforms presenting empirical  findings  of  a  survey  among  public  officials.  The  input  on  the  third  day  focused more specifically on situations of crisis and catastrophes where the temporal imperative of coordinative management is more pronounced. While Arjen Boins’ (Utrecht) attempt was to understand  crisis  coordination  more  generally,  Lise  H.  Rykkja  (Bergen)  presented  current research  on  the  coordination  efforts  in  the  case  of  the  22th  of  July  2011  terror  attacks  in Utøya and Oslo.

All  in  all,  the  PhD  projects  showed  a  variety  of  perspectives  and  dimensions  regarding coordination: Structural vs. procedural, formal vs. informal, negative vs. positive, vertical vs. horizontal.  The  detailed  reflection  on  the  mechanisms  achieving  coordination  (hierarchy, market and networks) and modes of ‘working together’ (information sharing, joint agencies and  working  groups,  core  executive  arrangements)  makes  the  workshop  a  valuable contribution for the participating scholars.