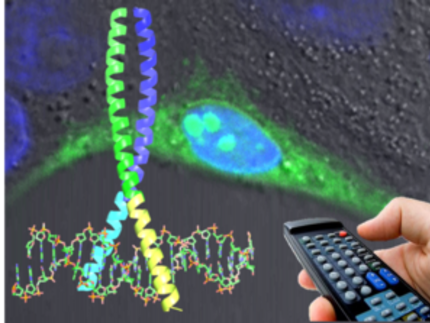 Protein-protein interactions are key for virtually all biological systems and play important roles in numerous diseases. Our research focuses on:

(i) understanding the molecular principles driving specificity and affinity of protein-protein interactions, and

(ii) generating inhibitors interfering with such protein interactions for analytical as well as medical purposes.

We use rational design in combination with in vivo and in vitro selection systems to generate such interfering peptides (iPEP). Remote control of inhibitor activity can be achieved by attaching photo-switchable chemical linkers. Quantitative data of inhibitor and wild-type interactions will aid modeling of the response of the underlying system. iPEPs are key tools for studying not only single pathways but also their interconnection on the systems level.

Our research combines synthetic aspects of biology with the system approach by generating synthetic peptide modules that are applicable for analyzing the integration of pathways in biological systems but can also be used to build artificial pathways to further our understanding of the system in general or validate hypotheses. 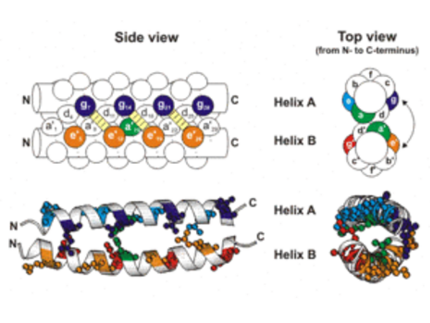 (see Figure left) are one of the most abundant protein interaction domains. Approximately 3-5% of amino acids in proteins are estimated to adopt coiled-coil folds. They play key roles in virtually every physiological system which demonstrates their significance. Coiled coils have one of the simplest dimerization interfaces, yet they can mediate highly selective protein associations.

Coiled coils consist of two or more α-helices that wrap around one another in a left-handed supercoil. Coiled coils have several modes of interaction: they can form homodimers or heterodimers, they can form two-, three- four- or five-stranded complexes, and they can align in a parallel or an antiparallel orientation.

The sequence of coiled coils is characterized by a conserved seven-residue repeat, (a-b-c-d-e-f-g)n. The first (a) and fourth (d) position form the dimerization interface between the helices and are generally occupied by hydrophobic amino acids. The other amino acids in the repeat are mostly polar or charged and can form inter- and intrahelical interactions that contribute to the stability and specificity of complex formation. In parallel coiled coils, the edge (e and g) residues can make important interhelical interactions between gi and e'i+5 residues (the prime denotes the complementary strand), and thereby mediate heterospecific pairing.

Our lab focusses on the specific targeting of natural coiled coil sequences. By generating and analyzing new coiled coil domains by biological and biophysical means we will greatly promote the understanding of interaction principles of coiled coils.