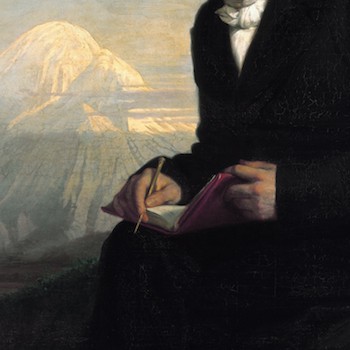 The Chair of French- and Spanish-speaking Literatures (Prof. Dr. Ottmar Ette) at the Institute for Romance Languages and Literatures of the Philosophical Faculty of the University of Potsdam announces 5 openings in the context of a new BMBF project entitled “Alexander von Humboldt’s American Travel diaries: Genealogy, Chronology, and Epistemology.”

The following three-year positions are available for February 1, 2014:

Salaries for all positions are competitive (E 13 and E 14 in the German context).

In the context of this transdisciplinary project (under the direction of Prof. Dr. Ottmar Ette), the following research disciplinary foci are most desirable: literary studies, visual studies, history of science, geography. The expected outcome for each position is either a completed doctoral dissertation or a publishable monograph.

Together with the purchase, the Federal Ministry of Education and Research (BMBF) is funding a joint research programm by the Universität Potsdam and the Staatsbibliothek zu Berlin – Preußischer Kulturbesitz. Starting in 2014, Prof. Dr. Ottmar Ette (Universität Potsdam) will lead a research group of at least five researchers (doc and postdoc level) to work on the material, cultural, and epistemological significance of Humboldt’s travel diaries, which can be considered the foundation of what Ottmar Ette has coined as “Humboldtian Writing”.

At the same time, the project includes the complete digitization of both the volumes of Humboldt’s diaries as well as the entire literary estate, currently available in the archives of the Staatsbibliothek. Taken together, both initiatives will provide a new ground for current and future research on the history of European science in the 19th century in general and Alexander von Humboldt Studies in particular.

The purchase of the travel diaries was funded by a consortium of both public and private institutions. The nine leather-bound books will be presented to the public in an official ceremony early 2014.

Editions: Alexander von Humboldt: “Views of the Cordilleras and Monuments of the Indigenous Peoples of the Americas“, Chicago University Press 2012

Humboldt, Alexander von: Views of the Cordilleras and Monuments of the Indigenous Peoples of the Americas. A Critical Edition. Edited with an Introduction by Vera M. Kutzinski and Ottmar Ette. Translated by J. Ryan Poynter. With Annotations by Giorleny D. Altamirano Rayo and Tobias Kraft. Chicago – London: The University of Chicago Press 2012 [618 + xxxvii p.]

In 2012, the Chicago University Press published the second volume of the HiE – Alexander von Humboldt in English series. The new critical edition is available online and in the bookstores since January 2013.

This new edition is a key contribution not only to Mesoamerican and Cultural Studies or to the history of science, but also to indigenous and postcolonial studies: END_OF_DOCUMENT_TOKEN_TO_BE_REPLACED

For TransArea Studies, spaces and territories are made out of movements and vectorizations: frontiers are understood by its criss-crossings at a global scale: circulations of knowledge in specific historical periods of accelerated globalization: transcultural landscapes translated into new prospective horizons. Read more