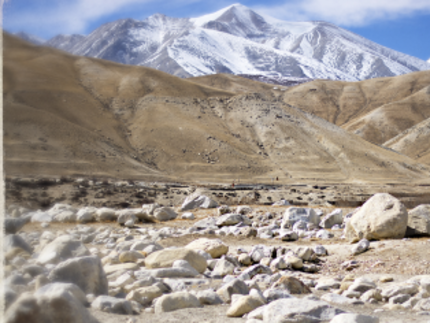 A disproportionate increase in population in mountainous regions worldwide currently coincides with climate-accelerated rates of natural hazards. Glacial lake outburst floods (GLOFs) are an example for such a hazard. GLOFs are a special case of flooding that results from sudden release of meltwater ponded behind natural dams, and their connection to climate change are intensely debated. Glacial meltwater lakes occupy the highest parts of a mountain range, so their potential energy can be transformed to hazardous and highly destructive flows. The combined effects of increased human exposure (and thus vulnerability) and climate change on GLOF hazards and the corre-sponding changes to hazards and risk are subject of this proposal. Although satellite-based remote sensing is an efficient analysis and monitoring tool, remaining uncertainties are substantial because of the complexity of the involved processes and the limited temporal repeat rate of data acquisitions. The same holds for damage potential from an increase in development as well as urbanization of mountain areas. Additional uncertainty pertains to GLOFs that are reconstructed from remotely-sensed data and to future GLOFs projected from corresponding climate simulations.