This project studies the source(s) of extraction asymmetries in syntax from a cross-linguistic perspective, in particular subject/non-subject asymmetries. It is well-known that subject displacement tends to be more restricted than non-subject displacement in a number of languages in that the former often requires special morphological devices or syntactic constructions (e.g. valency-reducing operations) to be expressed. We focus on one instance of such an asymmetry that is comparatively less well studied: the anti-agreement effect (AAE). In languages with the AAE, the morphology that doubles an argument (e.g. agreement) is reduced or completely absent when this argument is displaced (as in question formation or focus fronting) – at least according to the standard definition of the phenomenon in the literature. The overall goal of this project is to uncover the factors that cause the AAE and extraction asymmetries more generally. Is there a general constraint in the grammar that underlies all extraction asymmetries, or are there various sources for these asymmetries? Why does the AAE hold in many, but not in all languages with argument doubling devices? To answer these questions, we conduct cross-linguistic in-depth studies of about 15 languages from different language (sub)families with the AAE, taking into account the general grammatical properties of each language. We collect new data with native speakers (in questionnaire studies with grammaticality judgements, elicitations) and compare the conditions that trigger/block the AAE across languages to find out how stable or variable it is across languages, and what the primary cause of the effect is.

The result of the project is the following: The AAE does not have the same source across languages that exhibit it, i.e. it is not due to a general constraint of the grammar. Rather, we found that the relatively stable (cross-linguistically wide-spread) effect of argument doubling reduction is multi-causal, i.e. it has different sources in different languages. The effect arises from the interplay of  the grammatical operations and (in part language-specific) restrictions on them in the individual languages. The crucial empirical observation that motivates this view is that, in language after language, the AAE also occurs outside of displacement constructions. Thus, there must be a more general rule at play that governs argument doubling, and which also accounts for the AAE in the displacement contexts. In our work, we aim to uncover these more general rules, and can thus also explain why the AAE arises in the first place, unlike the previous literature. The relevant factors identified are (a) the argument doubling system (how is argument doubling constrained in the language?), (b) the doubling device (agreement vs. pronominal clitic that is an argument of the verb or just doubles an argument) and (c) the formation of argument displacement (how are these dependencies formed? via movement or base-generation, with gaps or resumptive pronouns?). We found that in some languages the AAE is the result of contextual allomorphy, e.g. in Limbum (Grassfields Bantu, Niger-Congo) and Welsh (Celtic, Indo-European); in others it is due to the fact that the doubling device is in fact the true argument of the verb rather than the NP associated with it, e.g. in Awing (Grassfields Bantu, Niger-Congo); and in another group of languages it is the pronominal nature of the doubling device that constrains the nature of its antecedent: the antecedent must be referential/specific, which excluded doubling of antecedents such as wh-pronouns, e.g. in Asante Twi (Kwa, Niger-Congo), Fiorentino (Romance, Indo-European). Our findings also suggest that it is not necessary - and in fact superfluous - to postulate construction-specific rules related either to displacement or the feature triggering this displacement to account for the AAE, as done in the previous literature. It can be subsumed under a broader pattern in a given language that is due to general restrictions on the doubling device and the nature of displacement in a given language. 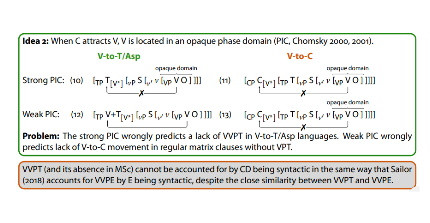 The parallels between ellispis and copy deletion: A case for post-syntactic head movement. 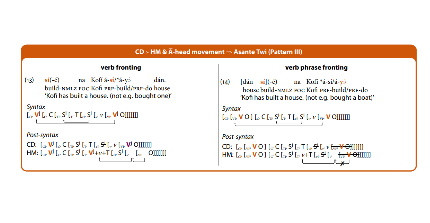 Deriving the typology of predicate fronting.