The first question concerns the limits of intra- and interspeaker variability in interpretation (variability subtypes 3&4): Which strategies do language users employ for adapting their interpretation of utterances to the communicative needs at hand, and for evaluating utterances as felicitous and true in a given communicative setting? The empirical and theoretical focus is on the (un-)availability of structural, lexical, and evaluative adaptation processes in four semantic phenomena, distributed over four work packages: relative quantifier scope and the availability of inverse scope (WP1); the felicity and interpretation of bare SG count arguments (WP2); the accomodability of existence presuppositions (WP3); and the interpretation of counterfactual conditionals (AP4). We will test for the (un-)availability of interpretations and adaptation procedures in relation to differences in communicative setting, on the one hand, and in relation to constraints imposed by the underlying grammatical systems, on the other. We are interested in identifying (i.) interpretive procedures that are systematically blocked across speakers and trials; and (ii.) interpretive procedures that depend on structural reanalysis. The identification of such cases will shed light on the workings of the syntax-semantics interface. In particular, it will help in evaluating the hypothesis that syntax is a largely autonomous structure-building system, immune to the requirements of the interpretive system.

The second question serves the same goal by adding a cross-linguistic perspective. We investigate which aspects of variability in semantic interpretation are constant across languages, and which ones are language-specific and constrained by the grammars of the underlying linguistic systems (variability subtype 1). Here, we focus on differences in word order (rigid vs flexible), in the inventory of functional markers for expressing (in-)definiteness on NPs, and in the functional interpretation of definite markers across languages. The empirical data will be collected in a series of offline experiments and statistically analyzed.

In sum, the project will contribute to a better understanding of which aspects of variability in interpretation depend on non-linguistic factors (communicative needs, processing),  and which ones are contingent on, or altogether blocked by grammatical constraints of the underlying linguistic system. 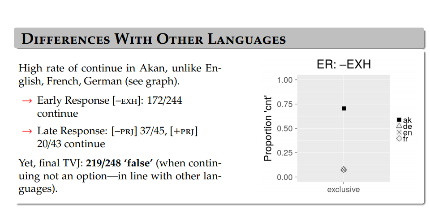 Quantitative data in the field: Two case studies on Akan. 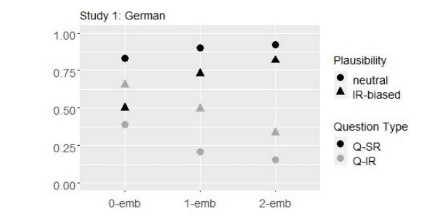