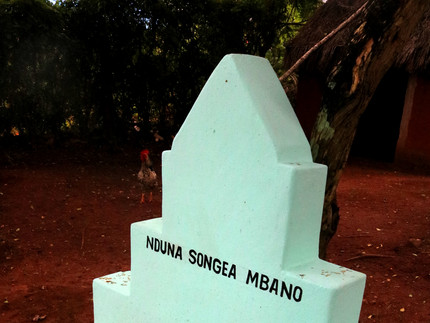 Photo: .
The grave of Ngoni leader Songea Mbano, with an empty space waiting for his head to be reburied.

A multidirectional (web)site of memory for ancestors

As a PhD thesis on the topic of postcolonial memory during and after the repatriation of human remains to African communities and countries, Remembering the Dismembered also aspires to repatriate the knowledge generated through this project and make it accessible for concerned communities and other interested parties. Reaching out beyond the sphere of academia to new media and audiences, this (web)site of memory tells stories of anticolonial resistance from South Africa, Tanzania and Namibia, and about different cases of repatriation: Mtwa Mkwawa, leader of the Wahehe; Xhosa King Hintsa; the Herero and Nama; Sarah Baartman and Khoi leader Dawid Stuurman; Mangi Meli of the Wachaga; and Songea Mbano of the Wangoni. Polyphony and transparence are key concepts in this outreach project: descendants and people implicated in the issue speak through recordings and transcripts, and the process of ethnographic research is unveiled. The book is besides linked to the website by QR codes and URLs, so that audio recordings disrupt the tiresome reading of a thesis. As the Internet reshapes the meaning of words such as “navigation,” the website also challenges the concept of a monograph. It draws vectors between print and digital media, between English, Swahili and isiXhosa, but also geographical connections from Songea (TZA) to Swakopmund (NAM). With its soundtrack and dissonances, Remembering the Dismembered is a curatorial call for the recognition of ancestors, anti-colonial resistance, and ongoing (neo)colonial injustices.

Photo: .
The grave of Ngoni leader Songea Mbano, with an empty space waiting for his head to be reburied.