Climate change is a key challenge for public communication at all levels. The scientific foundations and methods of this field are highly complex, global and abstract. At the same time, it is of the highest socio-political importance, because global warming is changing the world as we knew it in many ways and for each individual in different ways.

Scientific institutions involved in climate research, governmental and non-governmental organisations, educational institutions such as schools or museums, press agencies and agency service providers are faced with the task of bringing the complex scientific interrelationships closer to a broad public without overwhelming it. The various actors are looking for ways to convey scientific justifications and their possible consequences in a vivid and convincing way, but also as concretely as possible. Creative actors experiment with a variety of different formats and media such as data visualizations, photos, films, installations and interactive media. Visual media are a form on which particularly high expectations are placed in this field. The research project "Climate Images" deals with these topics from the perspective of media and image sciences.

For images of the climate represent a prime cultural factor; at the same time, however, they have not yet been collected at any location, let alone historically classified and analyzed. For this reason, Birgit Schneider had already decided, when applying for the Dilthey Fellowship in 2009, to create a comprehensive image database, the "Klimathek", on the subject. Since then, the purpose of this systematic and continuous collecting activity has been to examine the images in an interdisciplinary context with regard to their visual forms and analytical power as well as their strategies of persuasion. In addition to numerous essays in German and English, the monograph "Klimabilder" has been published in 2018, summarising the research carried out in recent years.

Since 2017, the research project has been methodically extended by the funded research project „Digital Analysis of Networked Climate Images“, together with PIK and the Interaction Design Lab of the Potsdam University of Applied Sciences. The anchoring in the humanities and natural sciences as well as in interface design takes into account the interdisciplinary character of the project, which is also located in Potsdam at an important historical and current location for observation and modelling on climate issues.

Birgit Schneider is currently working on a guideline for climate change communication. This will be developed within the framework of a teaching research seminar along the Potsdam 100 % climate protection master plan.

"Our notions of climate and climate change come from images - images with which the sciences make their findings visible. These images must be interpreted and criticised in order to reveal their significance and intentions. This is precisely what Birgit Schneider undertakes in this politically volatile media-critical study, which, based on Alexander von Humboldt's weather knowledge, leads her to today's concept of climate. She examines how the data collected using scientific methods can be visually processed for the sake of operationalization, especially in curve graphics. Knowledge of these and other means of representation is important not least in order to refute the arguments of those who deliberately and falsely still present climate change as an "open question". (blurb)

"With her book Birgit Schneider has succeeded in making a brilliant contribution to the current climate debate in the field of cultural studies, which at the same time offers enlightenment in the only meaningful way, not only by providing criteria for the distinction between reason and obscurantism, but also by enlightening reason about its own conditions and consequences."
– Michael Hagner, Frankfurter Allgemeine Zeitung 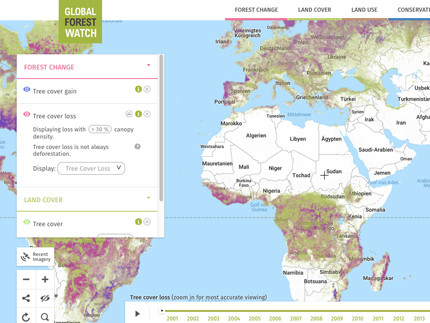 The politics of zoom: Problems with downscaling climate visualizations

In the study, Birgit Schneider and Lynda Walsh examine the problems that arise when scaling global maps to local ones from a critical perspective. The examples are interactive climate visualization platforms that enable their users to localize global climate information to support local policies. By examining the political implications of the instrument "zoom" from a media science and rhetorical point of view, they complement the perspectives of cultural cartography with the question of scaling. The authors break the cinematic trope of the "zoom" and show how it transfers the political problems of synoptics to the level of individual communities. As a potential antidote to the politics of zooming, they recommend a downscaling strategy of connectivity that associates rather than reduces local views of the climate. 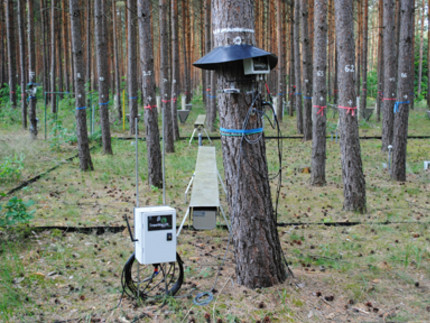 The body of a pine in the research forest of the Thynen Institute is scanned medially in order to make perceptible what is no longer perceptible due to medial armament. The article questions the hope or longing for a new approach to the primordial mythologies of trees by connecting to a tree app, i.e. finding a new narrative that allows people to experience what the disturbances of climate change will mean culturally. 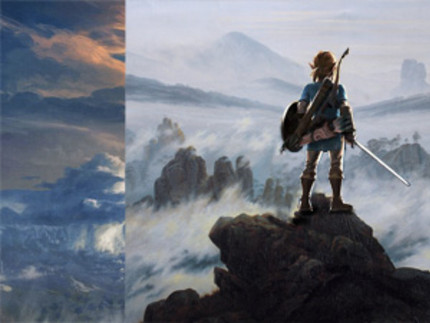 Photo: Collage by Birgit Schneider
Atmospheres in a computer game. Collage from the game Zelda and the "Nebelmeer" by Caspar David Friedrich.

Climate - Game - Worlds: A media-aesthetic investigation of the representation and function of climate in computer games

In view of an increasing number of works dealing with computer games from the perspective of ecocriticism (“green game studies”), this article offers a critical analytical schema regarding the representation and perception of climate and weather in computer games. The article draws from perspectives from media-aesthetics and media-ecology as well as from existential-ludology and combines them with concepts from climatology. This mixed-methods approach renders possible to analyze climate as an actor in computer game research and thereby gains new layers of analysis for popular computer games. The critical analytical schema is being tested with popular games such as No Man’s Sky and Zelda: Breath of the Wild, artgames such as Walden as well as serious games such as Block’hood and Stadtklima Architekt (Urban Climate Architect).

If you are interested in an English version of the chapter, please email to Birgit Schneider.

Photo: Collage by Birgit Schneider
Atmospheres in a computer game. Collage from the game Zelda and the "Nebelmeer" by Caspar David Friedrich. 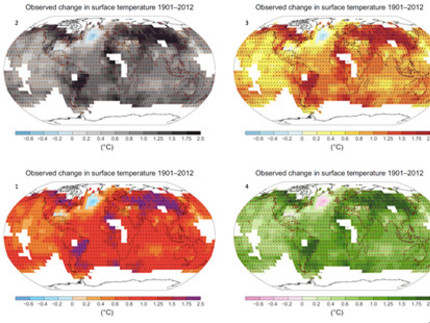 Photo: IPCC and Thomas Nocke/Birgit Schneider
Alternative colouring of a map of the Intergovernmental Panel on Climate Change (top left) showing global warming up to 2014.

This article is guided by the thesis that color is both – a rational way to structure and encode data visually, and a place where emotions like concern, fear and alarm can connect – and thus cultural readings can start from. This becomes particularly clear in visual climate communication where the colors blue and red are used in global future temperature maps and scenario graphs. Here, red colors are used to mark maximum values, temperature increases, great risk, anomalies and worst case scenarios like the RCP8.5 scenario, whereas blue colors denote cold temperatures but also illustrate best case scenarios. Testing six different color schemes the authors investigated how the perception, emotional reaction and understanding is altered if the scheme employing blue, bright red and purple is replaced by other color schemes. Besides the original IPCC color scheme, the team tested blue-grey-black, green-purple and purple-green as well as less dazzling shades of red. With their study, the authors are able to indicate how the understanding and credibility of climate change visualization is influenced by color, and how different color spectrums significantly change the emotional and associative reaction of the visualization in relation to the recipient group. The outcome of the research provides a guidance to estimate the impact of color in respect to the aim of visually communicating the risks of climate change and convincing different recipient groups about the gravity of the issue. Published in: Handbook of Climate Change Communication, Springer, 2018

Photo: IPCC and Thomas Nocke/Birgit Schneider
Alternative colouring of a map of the Intergovernmental Panel on Climate Change (top left) showing global warming up to 2014. 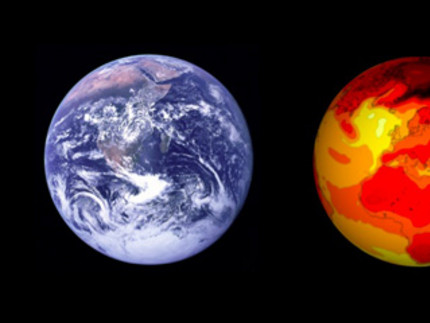 Burning worlds of cartography: a critical approach to climate cosmograms of the Anthropocene, Birgit Schneider (2016)

Climate science today makes use of a variety of red globes to explore and communicate findings. These transform the iconography which informs this image: the idealised, even mythical vision of the blue, vulnerable and perfect marble is impaired by the application of the colours yellow and red. Since only predictions that employ a lot of red seem to exist, spectators are confronted with the message that the future Earth that might turn out as envisaged here is undesirable. Here intuitively powerful narrations of the end of the world may connect. By employing methods of art history and visual analysis, and building on examples from current Intergovernmental Panel on Climate Change reports and future scenario maps, this article explores how burning world images bear – intentionally or not – elements of horror and shock. My question explored here is as follows: should ‘burning world’ images be understood as a new and powerful cosmology?

Scientific research on climate change has given rise to a variety of images picturing climate change. These range from colorful expert graphics, model visualizations, photographs of extreme weather events like floods, droughts or melting ice, symbols like polar bears, to animated and interactive visualizations. Climate change graphics have not only increased knowledge about the subject, they have begun to influence popular awareness of global weather events. The status of climate pictures today is particularly crucial, as global climate change as a long-term process cannot be seen. When images are widely distributed, they are able to shape how the world is thought about and seen. It is this implicit basic assumption of the power of images to influence reality that this book addresses: today's images might become the blueprint for tomorrow's realities. „Image Politics of Climate Change“ combines a wide interdisciplinary range of perspectives and questions, treated here in sixteen interdisciplinary case studies. The author's specializations include both visual practice and theory: in the fields of climate sciences, computer graphics, art, curating, art history and visual studies, communication and cultural science, environmental and science & technology studies. The close interlinking of these viewpoints promotes in-depth insights into issues of production and analysis of climate visualization.

This article analyzes how geographic monitoring tools relate data maps to environmental politics by taking as an example the most extensive forest watch platform known at the moment, Global Forest Watch (GFW). The GFW-platform can be used as a test case for geopolitical claims on forests which, by installing a feedback system, aims at changing human-environment interactions by monitoring precisely these interactions.