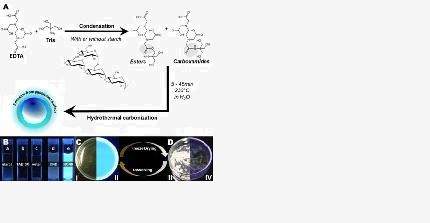 A new reliable, economic, and environmentally-friendly one-step synthesis is established to obtain carbon nanodots (CNDs) with well-defined and reproducible photoluminescence (PL) properties via the microwave-assisted hydrothermal treatment of starch and Tris-acetate-EDTA (TAE) buffer as carbon sources. Three kinds of CNDs are prepared using different sets of above mentioned starting materials. The as-synthesized CNDs: C-CND (starch only), N-CND 1 (starch in TAE) and N-CND 2 (TAE only) exhibit highly homogenous PL and are ready to use without need for further purification. The CNDs are stable over a long period of time (>1 year) either in solution or as freeze-dried powder. Depending on starting material, CNDs with PL quantum yield (PLQY) ranging from less than 1% up to 28% are obtained. The influence of the precursor concentration, reaction time and type of additives on the optical properties (UV-Vis absorption, PL emission spectrum and PLQY) is carefully investigated, providing insight into the chemical processes that occur during CND formation. Remarkably, upon freeze-drying the initially brown CND-solution turns into a non-fluorescent white/slightly brown powder which recovers PL in aqueous solution and can potentially be applied as fluorescent marker in bio-imaging, as a reduction agent or as a photocatalyst.

Different approaches have been proposed to treat cancer cells using gold nanoparticles (AuNPs) in combination with radiation ranging from infraredlasers  to high-energy ion beams. Here we study the decomposition of the DNA/RNA nucleobases thymine (T) and uracil (U) and the well-known  radiosensitizer 5-bromouracil (BrU) in close vicinity to AuNPs, which are irradiated with a nanosecond pulsed laser (532 nm) matching the surface plasmon resonance of the AuNPs. The induced damage of nucleobases is analyzed by UV−vis absorption spectroscopy and surface-enhanced Raman scattering (SERS). A clear DNA damage is observed upon laser irradiation. SERS spectra indicate the fragmentation of the aromatic ring system of T and U as the dominant form of damage, whereas with BrU mainly the cleavage of the Br−C bond and formation of Br− ions is observed. This is accompanied by a partial transformation of BrU into U. The observed damage is at least partly ascribed to the intermediate formation of low energy electrons from the laser-excited AuNPs and subsequent dissociative electron attachment to T, U, and BrU. These reactions represent basic DNA damage pathways occurring on the one hand in plasmon-assisted cancer therapy and on the other hand in conventional cancer radiation therapy using AuNPs as sensitizing agents.