"Mariusz Kałczewiak has gone far beyond writing an excellent study of transatlantic migrant cultures. Through pathbreaking, multi-archive, multilingual research Polacos in Argentina transforms our understanding of transnational Jewish and Yiddish cultures. As the best studies always do, this book transcends its specific topics to offer new insights into how scholars might understand the movement of peoples across multiple borders, and how long term migrations come to transform both destination societies, and the places from which the migrants originally came." 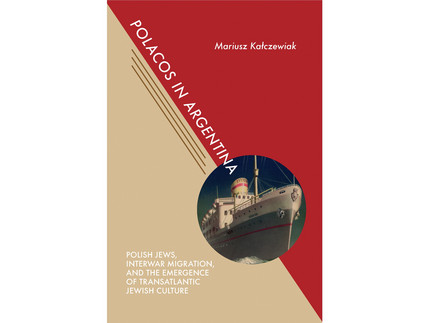 An examination of the social and cultural repercussions of Jewish emigration from Poland to Argentina in the 1920s and 1930s.

Between the 1890s and 1930s, Argentina, following the United States and Palestine, became the main destination for Eastern European Ashkenazi Jews seeking safety, civil rights, and better economic prospects. Just Between 1918 and 1939, sixty thousand Polish Jews established new homes in Argentina. They formed a strong ethnic community that quickly embraced Argentine culture while still maintaining their unique Jewish-Polish character. This mass migration caused a transfer of cultural, social, and political contents in both Poland and Argentina, forever shaping the cultural landscape of both lands.

In Polacos in Argentina: Polish Jews, Interwar Migration, and the Emergence of Transatlantic Jewish Culture, Mariusz Kalczewiak has constructed a multifaceted and in-depth narrative that sheds light on marginalized aspects of Jewish migration and enriches the dialogue between Latin American Jewish studies and Polish Jewish Studies. Based on archival research, Yiddish travelogues on Argentina, and the Yiddish and Spanish-language press, this study recreates a mosaic of entanglements that Jewish migration wove between Poland and Argentina.

Most studies on mass migration fail to acknowledge the role of the country of origin, but this innovative work approaches Jewish migration to Argentina as a continuous process that took place on both sides of the Atlantic. Taken as a whole, Polacos in Argentina enlightens the heterogeneous and complex issue of immigrant commitments, belongings, and expectations. Jewish emigration from Poland to Argentina serves as a case study of how ethnicity evolves and transforms among migrants and their children, and the dynamics that emerge between putting down roots in a new country and maintaining commitments to the country of origin.